So here is a strange thought. If a vertical electrically speaking is a half dipole with the other half as a ground plane to balance out. Perhaps there are ways to make equivalent director and reflector make it into a vertical yagi? Is that a possibility?

I know that it might be difficult to do, but low take-off angle without height and with a directional gain is an advantage.

I heard that when you run radials into a general direction, you also get some gain into that direction, not sure how much that would effect.

I took the EZNEC VERT1.EZ 40m model and added an identical passive element 27 feet away connected to the same miniNEC ground. Here are the results. 4+ dBi gain at a TOA of 24 deg. But this leads to another question. How does one implement a miniNEC ground in the real world?

To equal the above performance over high-accuracy ground, each element needs two radials elevated at 10 feet, one to the NW and one to the SW. 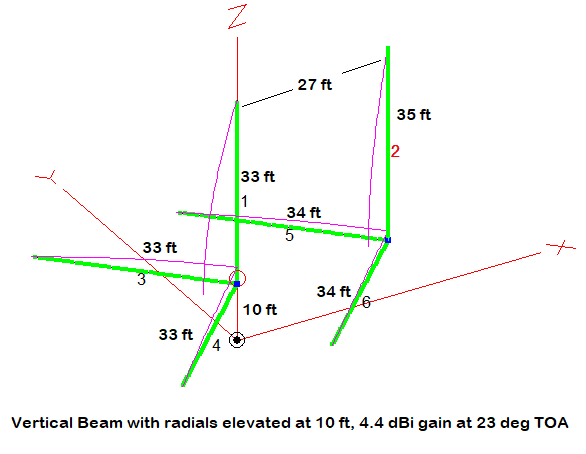 Sure, that can work.

Here's a monopole yagi I designed: 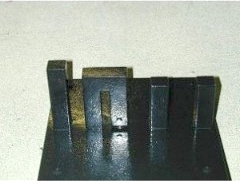 It's a half-yagi for remote control of a mine locomotive, improving the control range by firing one way down the tunnel. The driven element is a half-folded-dipole, a good match for 50 Ohms. Also, it's welded up from solid 20 mm steel so it survives low ceilings, cable snags, etc. It's for 915 MHz but the principle is the same at HF. A good ground screen will be required.

There is also a half-log-periodic antenna, sometimes called an LPMA. It's a fairly standard thing at HF, but takes up a lot of room for hams. Here's one from R&S for 1.5-30 MHz, 97 m long and needs a 90 m mast.

You'll find designs for directors or reflectors for monopoles out there. One neat trick is that you can switch direction with some relays to jump between being the driven element and being the reflector.

Not a strange thought, at all, with several interesting solutions described over the years. The information below is not presented as a construction idea: elements are #14 wire and lengths are approximate. The antenna is simulated over "real" ground of "medium" conductivity (Sommerfeld model), with the lower set of elevated radials .05$\lambda$ above ground and .01$\lambda$ vertical separation between the radial sets to prevent shorts. More engineering would have to be done to result in a practical design.

Just as you would with a horizontal yagi, a lengthened vertical parasitic reflector (wire 6) could be added to a driven vertical (wire 1): 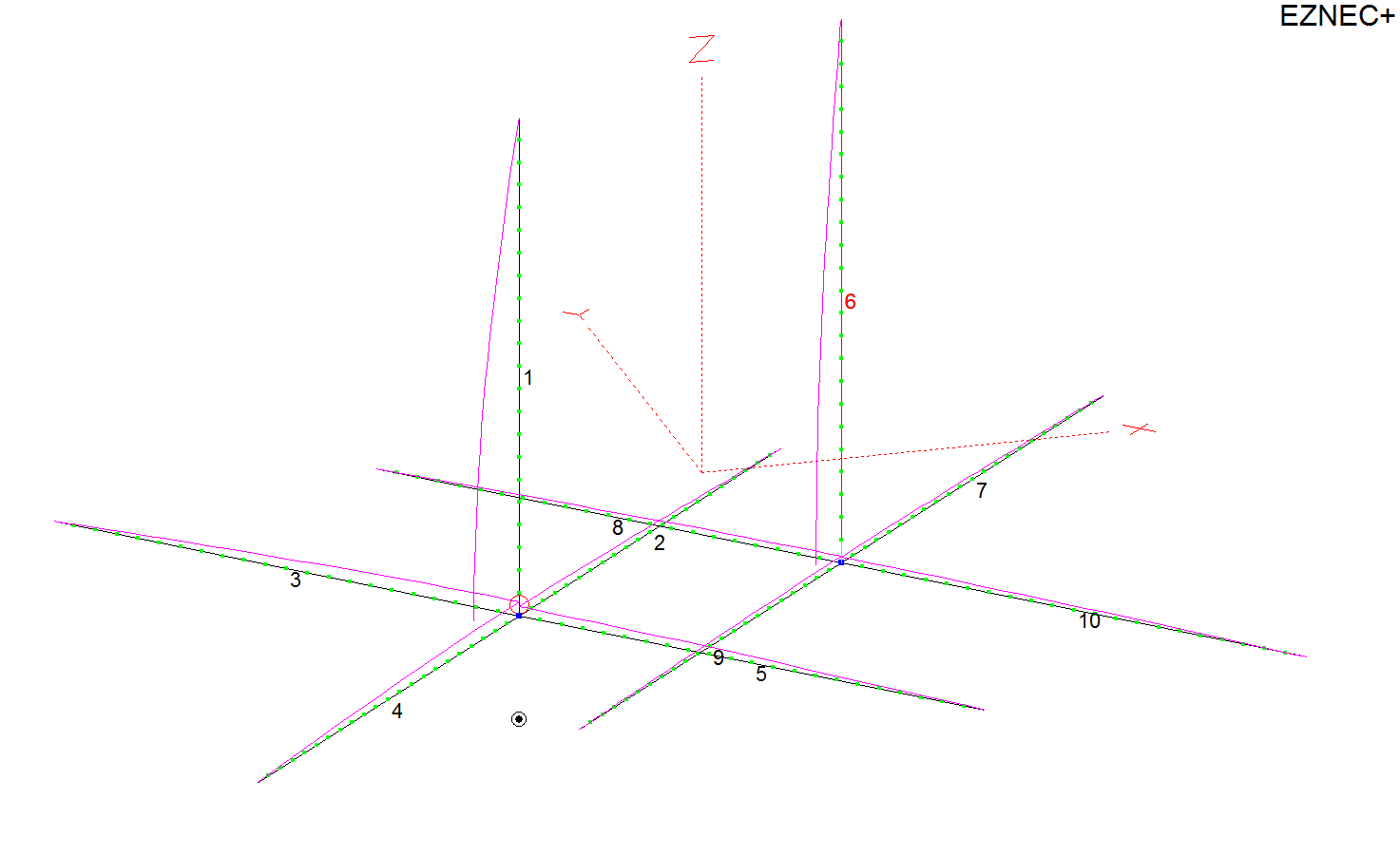 The horizontal spacing between the vertical elements is 0.15$\lambda$, the driven vertical and the radials (wires 2-4 and 7-10) are 0.24$\lambda$ long and the parasitic element (wire 6) is 9% longer than the driven element, producing some gain and useful directivity (elevation plane shown): 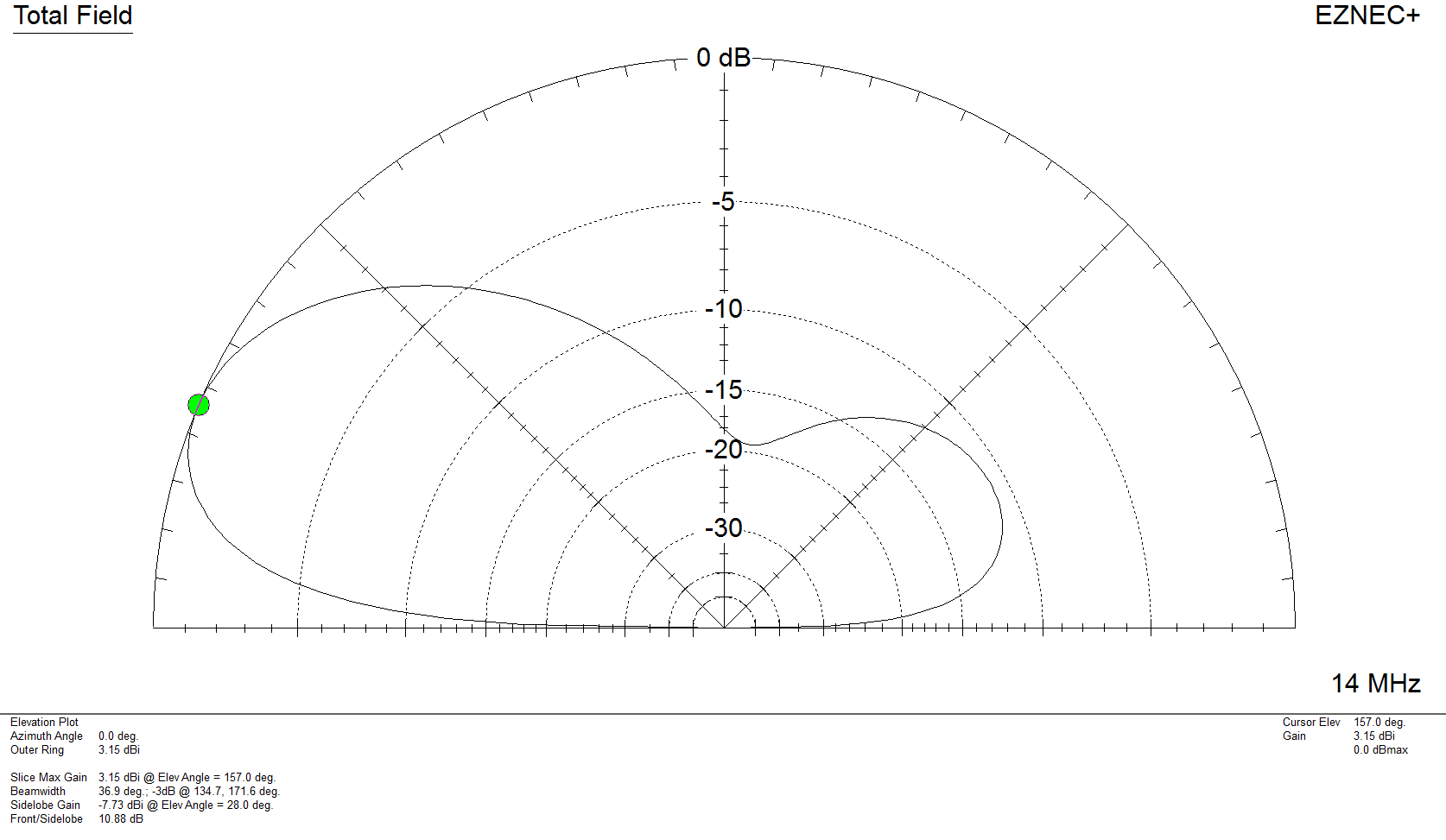 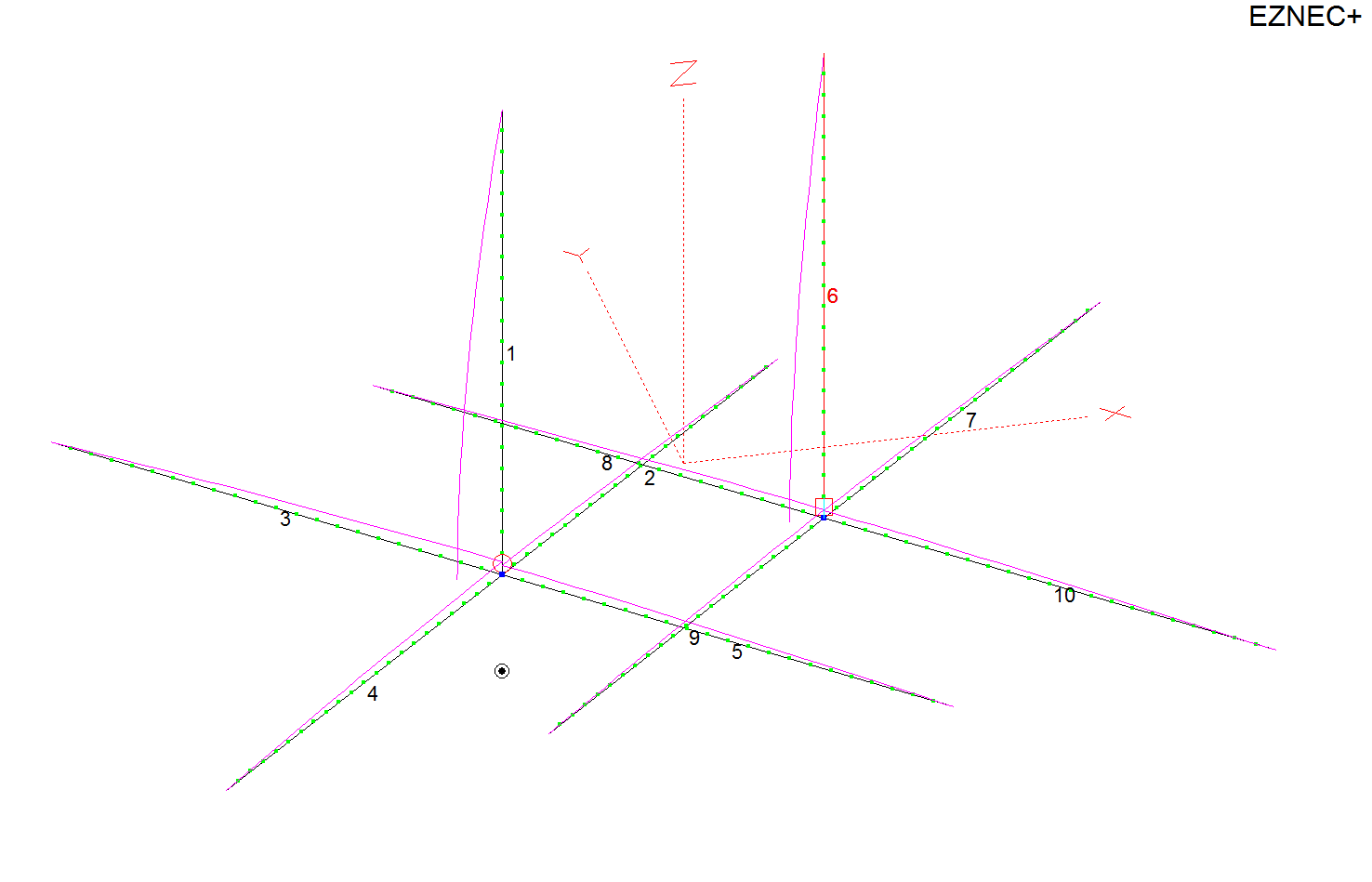 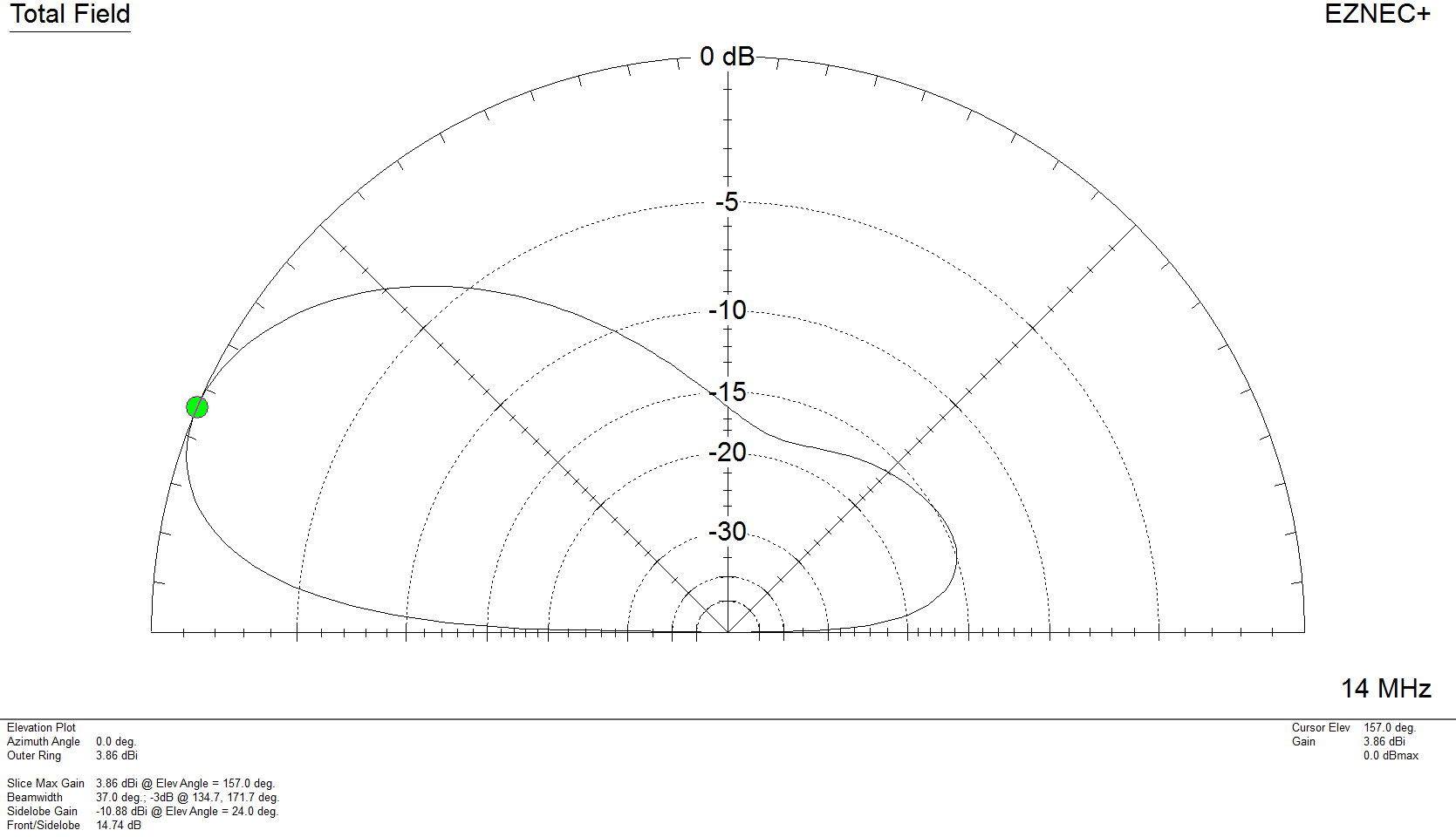 Sadly, modeling does not show useful directivity when replacing the inductive reactance with capacitance in an effort to make the loaded parasitic reflector into a director, so there is some limit to the flexibility of this approach. However, one could swap the driven and loaded connections to reverse the pattern.

Below is a NEC4.2 study of a 2-radiator, v-pol, parasitic array for the 40-meter band. Details for the configuration are shown within the red-outlined area on the left side of the graphic.

The study excludes the loss of a matching network at the feedpoint to produce a nominal 50 j0 Ω match to a transmission line connected to the input terminals of that network.

There is no need to use a Mininec ground in this study, as NEC4.x is able to model antenna system conductors on, or buried in a lossy ground plane (Earth, in this case).

This NEC model reported no geometry or segment errors at runtime.

Not the answer you're looking for? Browse other questions tagged antenna-theory vertical-antenna .

5
Can half of a directional antenna (Yagi-Uda, HB9CV) be replaced by a ground plane?

3
Antenna Tripod for a vertical antenna
1
vertical 40m antenna takeoff angle
2
Beamwidth of omni-directional antenna with gain
3
What sort of antenna would use a bicone or lozenge-like arrangement of vertical wires?
4
Vertical Yagi spun at 1000 RPM: gain properties?
1
Vertical antenna
3
Vertical antenna with feedpoint below ground plane?
0
Why is there so little difference in the gains of Yagi Uda antennas with omnidirectional antennas? Shouldn't the power at the back be at the front?
2
Measuring actual feedpoint impedance for a given frequency