Does the official International Morse code include alphabetic characters other than the 26 letters of the English alphabet? If so, what are the most common other alphabets or characters that one might find used on HF CW bands?

How do Greek and Cyrillic alphabets map to CW (Morse?) code?

A little searching will turn up more. They don't always agree, since they are conventional extensions, not standards.

Usage is sporadic at best. Many languages have mechanisms to cram their orthography into 7-bit ASCII, driven by the need for their language to work on computers.1 For example in German, "ß" can be written as "ss", and "ö" as "oe". These systems work for Morse code as well.

In some languages, simply removing diacritics doesn't introduce much ambiguity, so some people will simply omit them from transmitted Morse code. This isn't too surprising, considering the already high degree of abbreviation used even by English speakers, where a transmission might not even include words:

Morse code is, by definition, an encoding of the basic Latin alphabet, so languages that use something else (Chinese, Greek, Hebrew, Russian, to name a few) can not be represented in Morse code propper. This hasn't prevented those languages from developing similar dot-and-dash telegraph codes, and Wikipedia has a list. They do tend to use similar codes where possible. For example, Greek alpha shares the same code as "A", as the two share some relatively recent history. Where letters are more distantly related (for example Hebrew), the mappings tend to shoot for similar sound. Where the orthographic systems have basically nothing in common (Chinese), no intuitive mapping is possible.

1: multi-language support in computers is a relatively recent development, and still quite a few systems can't manage to get it right.

There are a few, as can be seen from my blog. Note the list includes the entire alphabet I could find, including a few alphabetic characters. I haven't personally heard any of them on the air, but I haven't learned CW enough to really be able to say anything on the matter. 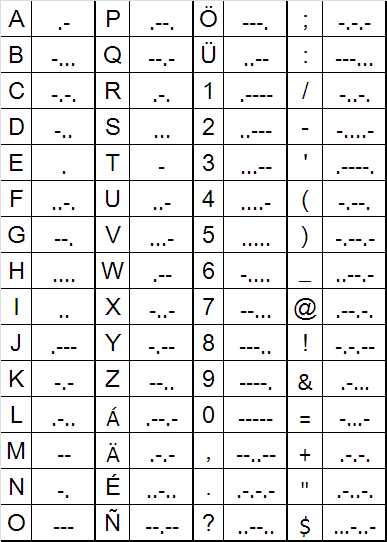 The Greek language is a little bit special because of the diphthongs (two successive letters producing a different sound when they appear together) which get mapped to a single symbol in Morse code. For more information (including Cyrilic) please see: http://en.wikipedia.org/wiki/Morse_code_for_non-Latin_alphabets

I found this one for Thai characters on Wikipedia, in Thai. Unfortunately there is not an English Language version of this page, because they put the information in the "Morse Code" entry.

Many vowels are compounds of other symbols, and it looks like they break all the vowels into their components for the sake of sending them in morse.

Finally, there are some markers for tone, or to indicate vowel length. 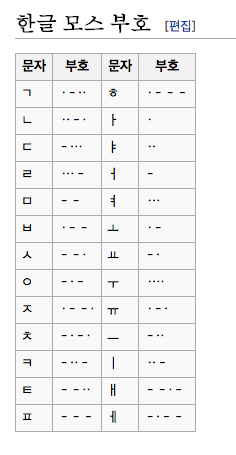 Not the answer you're looking for? Browse other questions tagged cw .

1
Where can I find documentation on Handicode?

7
Configuring an SDR for CW?
10
Scoring quality of Morse Code "fist"?
14
Where can one find recordings of Morse code, generated by humans and not machines?
5
Air gapped digital communications mode on VHF?
6
Has anyone actually heard or used rare Morse code characters on the air?
15
Is Morse code a digital, binary mode?
4
Why were "PARIS" and "CODEX" considered "typical words"?
11
Dominant speeds of Morse Communications
4
What nations still require Morse code testing for Amateur radio license?