I'm trying to design a low frequency dipole interferometer antenna array. I am realizing how little I know about radio antennae. I'm confused by the concept of effective area $A_e$ and how it applies to arrays. I haven't been able to get a clear answer on that.

What factors do I need (e.g. dipole length, spacing, baseline) to calculate the effective collecting area for the array as a whole?

For some context, the relevant part of the cited source:

The average collecting area is defined by

The effective collecting area of a receiving antenna is independent of its radiation environment, so this result applies for any type of radiation, not just blackbody radiation. Without using Maxwell's equations we have obtained the remarkable result true for all lossless antennas:

The description follows after a description about thermodynamic equilibrium and this illustration: 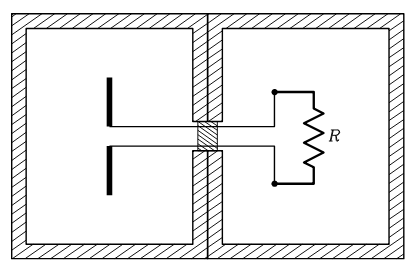 The discussion involves the thermodynamic equilibrium between the resistor and the antenna. This "average collecting area" is describing what should be fairly intuitive: this equilibrium holds regardless of what kind of antenna is put in the left cavity.

In other words, the average collecting area has something to do with how the antenna responds, on average, over all directions. It must be the same for all lossless antennas because anything else would violate conservation of energy.

Note the average collecting area is $\langle A_e \rangle$. Just $A_e$ on its own is effective aperture, which has an additional term $G$ added for gain:

Gain is often given as a single number, just the maximum gain for the antenna. But more completely, gain is defined as a function over direction and polarization. Since the average collecting area is the same for any lossless antenna design, and the effective aperture is the average collecting area multiplied by gain, it follows that if gain is to be increased in some direction, it must necessarily be decreased in some other direction if no laws of thermodynamics are to be broken.

If the antennas are several wavelengths apart, then the interactions between them will be negligible and performance will be dominated by the correlators.

If the antennas are closer than that, mutual coupling between them must be considered. The interactions are not simple or amenable to a closed form solution, so usually some antenna modelling software is used to solve the equations numerically.

The effective aperture can be expressed in terms of the antenna's gain: $$A_e=\frac{\lambda^2 G}{4\pi}$$ where G is the "linear" value of gain, not the logarithm of a ratio expressed in decibels. Assuming you are able to obtain the gain of your dipole array, this may be a more workable expression.

Not the answer you're looking for? Browse other questions tagged antenna wire-antenna dipole phased-array or ask your own question.