Given the classical top down view, what does a bottom up view of RF waves look like?

Quote from Wikipedia, Photons: "Nevertheless, all semiclassical theories were refuted definitively in the 1970s and 1980s by photon-correlation experiments. Hence, Einstein's hypothesis that quantization is a property of light itself is considered to be proven."

From the Nobel archives: "The photon is the field quantum (particle) acting as the communicator of force between charged particles."

Yes, RF radiation is quantized. Yes, the photon is the quantum of electromagnetic radiation.

However, this is not an excuse to revert to a particle theory of light. It is tempting to think of little "light bullets" shooting out of transmitters, through the air in straight lines, then hitting the receiving antenna. But you'd have difficulty explaining even basic radio phenomena with such a theory. How do you explain interference in antenna arrays? Or diffraction that limits the aperture efficiency of dish antennas? How do the "light bullets" change direction at the ionosphere?

If you want to think of photons as particles that go from one point to another, then you have to consider all possible paths a photon can get from point A to point B, even paths that make no sense classically, including curved, circuitous paths that wander for no reason at all. All possible paths must be considered. 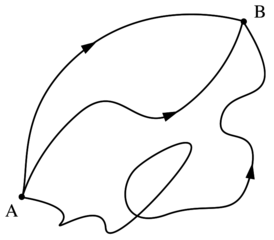 You must also account for the changing phase of the photon as it travels this path. Then all the possible paths combine in a path integral.

Since there are infinitely many possible paths, this is a very complicated problem, intractable except in the simplest cases. And while it does indeed explain how light can both be quantized while still exhibiting wave effects like interference and diffraction, it's extremely tedious, and we don't get the satisfaction of "light bullets" that travel in straight lines.

While this is an incredibly powerful tool for describing observable phenomena at very small scales, and it explains some things that classical electromagnetism could not such as the photovoltaic effect and the ultraviolet catastrophe, Maxwell's equations remain consistent with experimental results at more practical scales such as those encountered in radio communication.

Since QED provides none of a more intuitive understanding, a simpler mathematical model, or more accurate results for practical radio communication problems, I don't really see a reason to invoke it in any answer on this site.

... considering that a free copper electron driven by one amp at 10 MHz vibrates back and forth by less than 1% of the width of its copper atom (2mm diameter copper wire) how do most of those discrete packets of energy, generated by the transmitter, get to the antenna?

Just as the molecules of $\mathrm{H_2O}$ carrying an (ideal) water wave aren't displaced in the direction the wave travels, so it is with the electrons whose oscillations give rise to electromagnetic waves. It is only the disturbance that travels. According to the Standard Model of particle physics, the energy that travels along a transmission line, along an antenna conductor and between two antennas is an electromagnetic wave, described by a field equation, that is carried by a messenger particle.

Particles do not necessarily contain matter. Anything, including pure energy, that has momentum is considered to be a particle. So I have finally been able to picture fields and waves as clouds of energy particles called photons. Just as each individual in a flock of birds or a school of fish does not have to be tracked, each individual photon doesn't have to be tracked to understand what the cloud of photons is doing, i.e. performing a path integral is not necessary. As long as coherent photons from a single source are being considered, knowing the phase of each photon is not necessary.

We know that electromagnetic RF energy moves from the source to the antenna at the speed of light where it is radiated as radio waves traveling through the air. We know that free electrons in the conductors are somehow involved in the transfer of energy although they simply vibrate in place at RF. Knowing the abilities and limitations of electrons and photons enables one (me in particular) to understand what is going on at a particle collective level.

The only thing that electrons and photons have in common is that they are both quantum particles in the standard model. The characteristics of both particles are available on Wikipedia. The velocity of an electron driven by a current is called the drift velocity which is very low. The velocity of a photon is the speed of light in the medium. The electron is a charged particle with mass. The photon has zero charge and zero rest mass. Both particles can transfer energy but the photon transfers energy at the speed of light which the electron cannot do. Electromagnetic fields and waves consist of photons as does Maxwell's displacement current. Photons can go where electrons cannot go. This difference in capabilities is what is responsible for skin effect in RF conductors.

Most of the photons in the wave in a transmission line travel at an average velocity of VF(c) where VF is the velocity factor of the transmission line and c is the speed of lignt. Most of the photons travel through the air or insulation surrounding the conductor. The free electrons in the conductor act like a sort of bucket brigade while guiding the photons to the antenna. The differential nature of the coherent photon energy flow in the two conductors tends to prevent radiation of photons from the feedline. When the photons reach the antenna some are free to radiate while others are involved in maintaining the standing waves on the antenna.

Some people are satisfied with their mental picture of electromagnetic waves using field and waves and/or Maxwell's equations and I remain envious of them. For others, like me, who have trouble picturing that model, the photon model might help. It goes without saying that the way I choose to picture fields and waves in my mind doesn't have any effect on reality.