Does a loop antenna have less susceptibility to atmospheric noise than an open ended antenna?

I always get the feeling that an antenna which has a loop for the driven element such as a folded dipole or quad will pick up less static or 'high impedance' noise than an antenna that has free ends such as a dipole or long wire. Noting that atmospheric noise probably doesn't have an impedance.

The reason I have this idea is as follows.

A short piece of thick wire 2 inches long which is used to short out the ends of a transmission line isn't going to pick up anything, right? It has a low DC resistance and at HF a low radiation resistance, and noise in the atmosphere is going to have a hard time inducing any current in it because it's a very low impedance short compared to the easily manipulated seemingly high impedance of the noise. So a loop antenna is like a tame version of the 2 inch short.

Whereas in contrast, the ends of a dipole (for example) are high impedance because the current is zero (R = E / I) and so you get the feeling that noise will be able to have an effect or 'pull' the voltage at the ends of the dipole more easily because the dipole ends are not a low impedance.

It this thinking correct?

Your reasoning is not too far off.

For any antenna, several wavelengths away (in the far field), this ratio will be approximately 377 ohms (an ohm is a volt/ampere). This is a physical constant called the impedance of free space.

But closer to the antenna, the field impedance can vary by design. Let's compare a dipole that's small relative to wavelength, to a loop of similar size. Very close to the antenna, the field impedance for the dipole will be high, and low for the loop. And the intuitive explanation is as you expect: the loop is a short circuit, and the dipole an open circuit.

Paradoxically, at some intermediate distance which isn't very near the antenna, but is also not far enough away to be in the far field, the situation reverses. W8JI has this great graph: 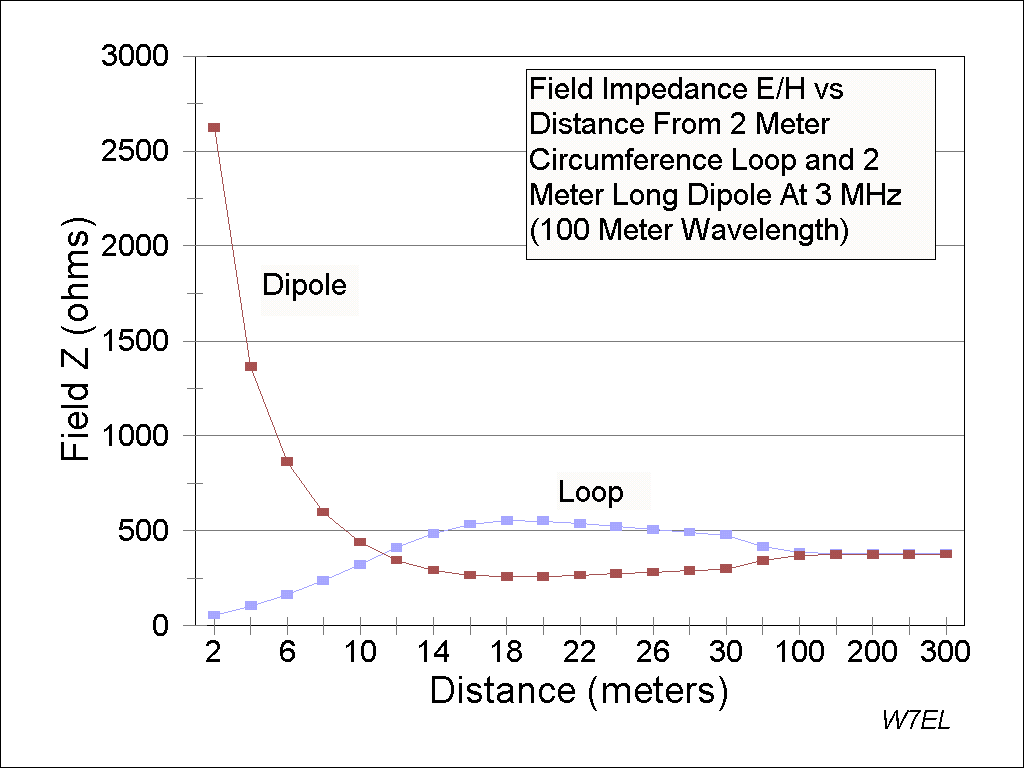 If the vertical axis were logarithmic, these two antennas would each have a field impedance that's the mirror of the other. This is an example of duality.

You asked specifically if loops have reduced sensitivity to atmospheric noise, and the answer is no. Since such noise is in the far field of the antenna, a dipole and a loop will perform identically if all else (efficiency, polarization, feed arrangement, height above ground, etc) are equal.

However especially on HF, there can be quite a lot of noise in the near field of the antenna. Since the near field impedance of these antennas are quite different and complementary, it is often the case that a loop does not pick up the same noise sources that a dipole does.

An ungrounded antenna element is subject to precipitation static (P-static) buildup that can result in arcing. At least one element of a dipole is usually without a DC ground reference while if one conductor of the transmission line to a loop antenna is grounded, P-static cannot build up to cause an arc. P-static can be caused by dust, snow, or rain and usually occurs under low humidity conditions, e.g. the Arizona desert around Phoenix. For more information about P-static, please do a web search.

Not the answer you're looking for? Browse other questions tagged antenna-theory dipole noise small-loop .

13
How does a folded dipole work?
14
What does the addition of a shield to a small loop accomplish?
3
Is it possible to make a shield that blocks time-varying electric fields, but not time-varying magnetic fields?

5
How to center-feed a single wire dipole?
2
Balun and tuner configuration for multiband dipole
3
Optimising a small magnetic loop with 1:1 SWR but little radiation
5
HF Noise Level S5 to S9+18
5
Signal path to maximize RFI rejection in an urban environment
9
High 40m noise floor during the evening but quiet in the afternoon
10
Can a 1:1 transformer be used as a protection from static electricity?
6
If receive performance doesn't depend on SWR, then how can I tune my manual HF antenna tuner by band noise?
4
QRN: How to chase down a solid S9 noise floor on 40m only