Are standing waves on a transmission line RF or DC?

I am very confused about Standing Waves on transmission lines.

Wikipedia says "a standing wave, also known as a stationary wave, is a wave which oscillates in time but whose peak amplitude profile does not move in space".

I'm getting the time domain and wave amplitude confused, I think.

Is the voltage amplitude of a standing wave a DC value which you could measure with a multi-meter (with a theoretically infinite input impedance) ?

The pictures you normally see of standing waves which look like a sine wave, is this an instantaneous snapshot or does the amplitude of the standing wave actually stay fixed in space and time along say a transmission line ?

Does the amplitude of the actual standing waves in space oscillate in time at the same rate as the two waves traveling in opposite directions ?

What else have I missed?

Thanks for citing the Wikipedia item on SWR; as well as being a solid overview of the subject as presented in textbooks, the animations reveal much that is not obvious from a static description.

Is the voltage amplitude of a standing wave a DC value which you could measure with a multi-meter (with a theoretically infinite input impedance) ?

Wikipedia tells us that the voltages along the line are AC:

"For example, the VSWR value 1.2:1 denotes an AC voltage due to standing waves along the transmission line reaching a peak value 1.2 times that of the minimum AC voltage along that line."

The RF voltage along the line could be measured with an ideal rectifier and smoothing filter connected to a DC multimeter. Non-ideal rectifiers may produce misleading measurements at low voltages because their response is not linear below their knee voltage.

The pictures you normally see of standing waves which look like a sine wave, is this an instantaneous snapshot or does the amplitude of the standing wave actually stay fixed in space and time along say a transmission line ?

The "picture you normally see of standing waves which look like a sine wave" is borne out in the animation for the special case of $\Gamma$=-1:

SWR=$\infty$ results from dividing the peak value by the value of zero at the nodes.

There are several noteworthy features in the subsequent graphs for SWR values of 4, 2 and 9, respectively: 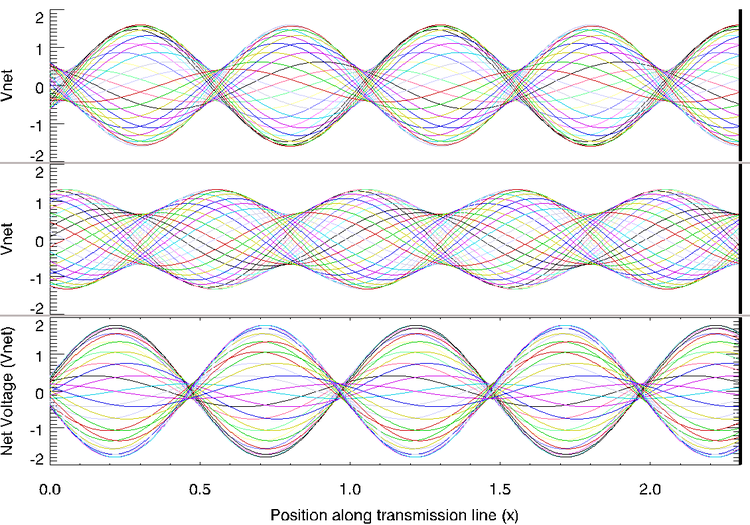 Does the amplitude of the actual standing waves in space oscillate in time at the same rate as the two waves traveling in opposite directions ?

If it was DC, there would be no wave.

With the wave, you have AC power; RF merely means that the frequency of the AC is high enough to be considered radio.

You can measure the voltage of the wave with a multimeter if it has an AC setting. This will measure either RMS voltage or simulated RMS voltage; these two are the same if the wave is a sine wave.

In this case, a picture is worth a thousand words.

What is usually shown as a standing wave is the envelope, not the wave itself. The wave oscillates at the frequency of operation between 100% magnetic energy (current) and 100% electric energy (voltage). Standing wave current is easy to measure. The lack of a reference point makes standing wave voltage harder to measure so the electric field may be measured instead and converted to voltage.

Note that all electromagnetic energy (including RF energy) is photonic, not electronic. The free electrons in the antenna conductor are simply oscillating in place while assisting the RF photons to travel at the speed of light back and forth on the standing wave antenna. Some of the photons are lost to radiation from the antenna. Antennas do not transmit or receive electrons! The exceptions to that statement are lightning and corona.

Not the answer you're looking for? Browse other questions tagged antenna-theory transmission-line or ask your own question.

1
There is no reverse flow of energy in a mismatched transmission line, is this correct?
7
How can the voltage at the center of a resonant half wave dipole be zero if the input impedance is 75 ohms?
1
Exactly why do some SWR meters give a changing reading depending on the length of coax used to connect to an antenna?
2
What happens to the transmitted power cancelled out by a yagi antenna's reflector?
1
Does the impedance along a transmission line change when there are standing waves?
1
Can received and transmitted signals on the same antenna combine to produce standing waves?
3
Confusion about dipole standing waves and feed point impedance
0
Why is a half wave dipole resonant?