What dielectric strength is required for a variable capacitors in a 100W T-network antenna tuner?

I would like to build a 100W T-network antenna tuner: 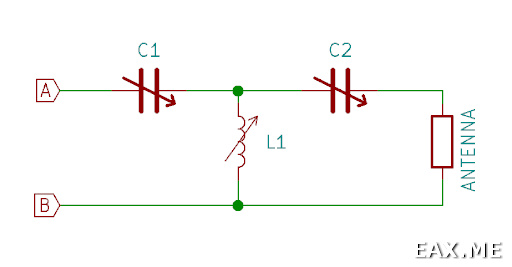 There are some doubts regarding the capacitors. They are quite small (about 3x3x3 cm) and the plates are placed very close to each other. I have MFJ-971 tuner and it uses much larger capacitors which have much more space between the plates. Although this tuner is rated 200W.

Basically my question is: how to determine (theoretically, experimentally or both) whether it's safe to use given capacitors in this network?

I made a NEC model of an antenna with the dimensions of your "long wire" on 14.2MHz, found the values of C1, L1 and C2 that produce a 50$\Omega$ match and simulated the network to observe the voltages across the capacitors with 100W dissipated in the load. The voltage across C1 was 220VRMS, over 300V peak. Given all the variables that I did not evaluate, plus good design practice to allow considerable margin, I would say that your capacitors will not support 100W transmissions.

Qualitatively, this result agrees with the 500VRMS, minimum, recommended in the 100W Z-match in the ARRL Handbook.

Not the answer you're looking for? Browse other questions tagged diy antenna-tuner or ask your own question.