What are these antennas used for?

I noticed this antenna park in Heidmoosstrasse, Switzerland. What is it used for? 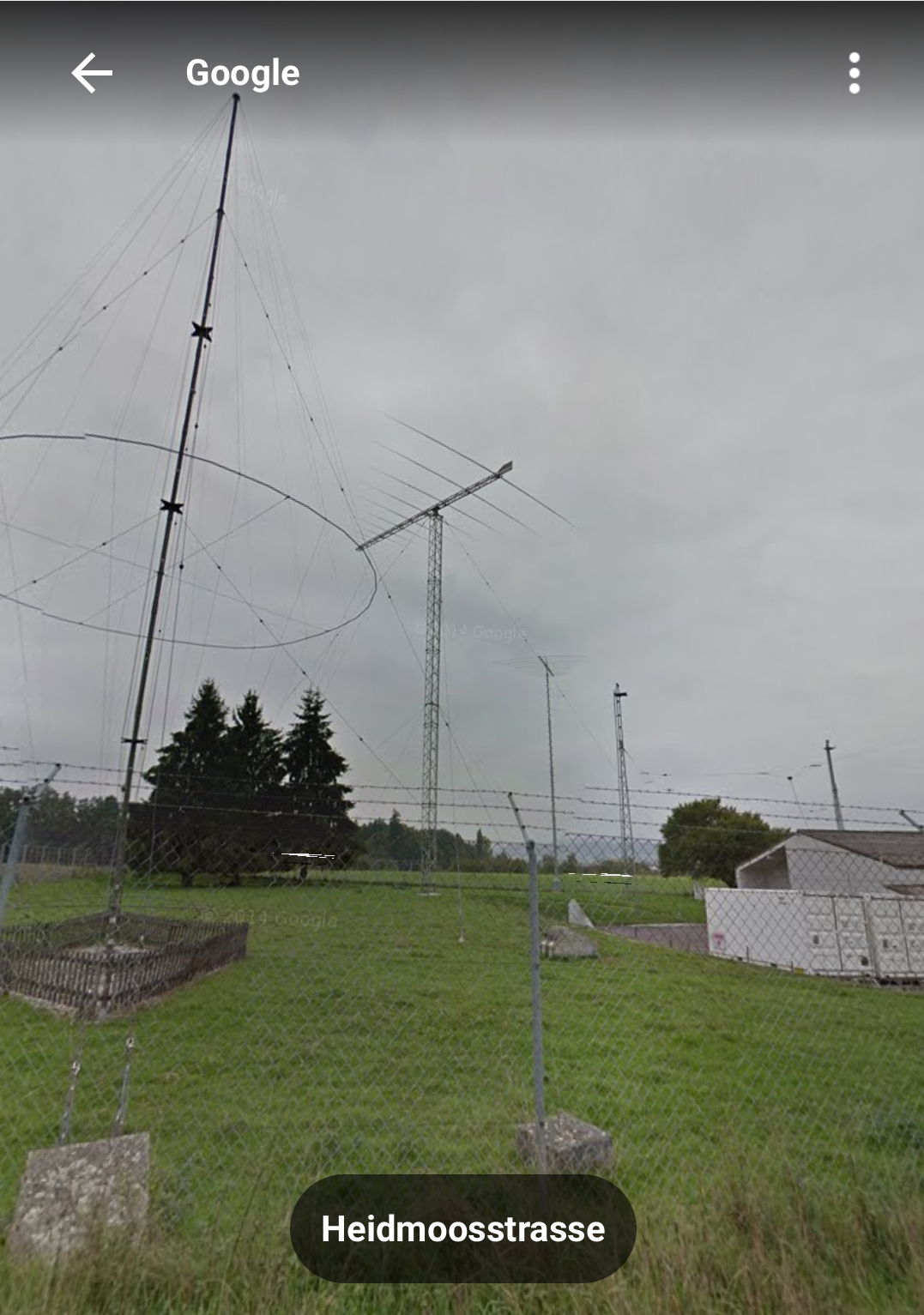 UPDATE: I've started a followup question regarding the leftmost antenna, which I originally took to be a discone. See: What sort of antenna would use a bicone or lozenge-like arrangement of vertical wires? (Thanks @HK1A for noticing my error!)

I see at least four antennas in that picture: one mystery antenna on the left, two log-periodic on towers in the middle, and a dipole above the building. All look like they are designed to work best at relatively low frequencies, specifically (and confusingly) within the High Frequency (HF) region.

The discone and the LPDAs [would be] interesting to compare and contrast [even though there's probably not a discone in the picture after all]:

The dipole here is the one that almost looks like a telegraph wire coming out of the shack on the right and then T-ing out above the fence in the picture's framing. That one works on one or a small handful of "fixed" frequencies. Coupling "broadside", it's not really omni-directional but it's not particularly directional either. I shouldn't make it sound too boring, because dipole antennas are pretty much the fundamental concept within the rest of antenna theory. Just not nearly so versatile, or cool-looking, as the other two :-)

There are several antennas of different types. Near the front looks like a discone antenna and the beam on the tower looks like a Log Periodic antenna.

Such an antenna farm is typical of a government or military installation. In the US, the regional FEMA (Federal Emergency Management Agency) sites have similar antenna farms. These are designed to provide multi-frequency (HF, VHF, UHF) communications in times of emergency.

I am not familiar though with Switzerland but likely it is a government site.

The antenna in the left foreground is probably a conical monopole, as described by E.W. Pappenfus, WB6LOH, in QST for November 1966. Antennas of the size order shown in the OP are probably for use from 4MHz and higher in the medium-wave band.

Not the answer you're looking for? Browse other questions tagged antenna hf frequency .

17
Should I chose a vertical or a horizontal HF antenna?
5
Dipole antenna radiation field equation
5
Using a loop antenna on a harmonic of the intended antenna frequency
3
What sort of antenna would use a bicone or lozenge-like arrangement of vertical wires?

2
What antenna to use for medium frequencies in an apartment building?
12
What are the relative bandwidths of the amateur bands?
2
Reciprocity for loopstick antennas?
5
What might this tower be used for?
6
What are these continuous sine wave tones I keep hearing?
3
What are these large antenna structures (used for)?
5
What is the frequency range 2300-21950 kHz used for?
5
What are these antennas?
5
Do these look like amateur radio antennas?