Estimating the efficiency of a shortened (loaded) antenna

Recently I've build a trap dipole for 20/40/80m bands. I followed an article by John DeGood, NU3E and got following measurements:

You can find a complete description of the antenna (including descriptions of the balun, used wire, etc) here and here (in Russian, but Google Translate should manage; please email me if you got any questions).

I was thinking about the following method: 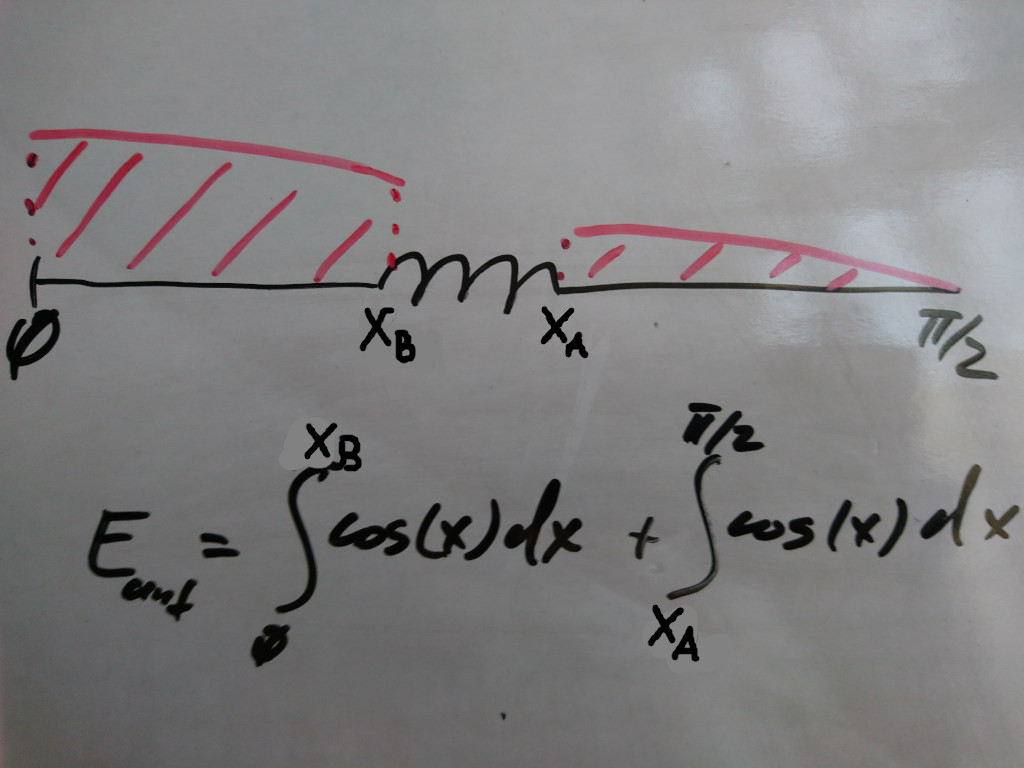 It is based on the fact that the current distribution in the antenna is sinusoidal; it radiates more in the proximity to the balun and almost doesn't radiate at the end of the arm. The radiation and size of the coil are considered neglectable.

I used SciPy to calculate an efficiency of the dipole on 40m band:

... and got 84.76% efficiency comparing to a full-size 40m dipole. Naturally this is only a rough estimate, and I'm not interested in calculating a very-very accurate value.

Now I have two questions. 1) Is this method more or less OK or is it completely wrong? If it's wrong could you please suggest a better method? 2) Can this method be generalized for 2 and more coils? The problem is that I don't know in which phase the current is between two coils. Thus currently I can only estimate an upper (70%) and lower (41.1%) bounds for 80m, by ignoring one of the coils, and tell that the actual efficiency is somewhere in between (55.5%).

I applaud you for diving into this topic. The notion of trap efficiency has been driven largely by antenna marketing FUD (Fear, Uncertainty, and Doubt) with implicative phrases such as "no lossy traps". Since then, hams have been wringing their hands at the thought of all of those losses in their favorite trap antenna. Here is a current example of such an advertisement: 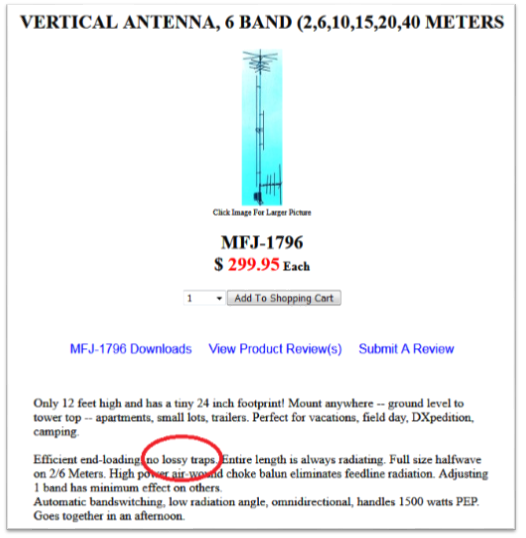 Unfortunately, your integral approach to the analysis of trap loss will not present usable results. You have effectively pieced together two different antennas while calling the missing current the loss. In order to understand the underlying issues, it pays to briefly explore wave mechanics as they apply to a dipole antenna.

From a wave mechanics perspective, when current initially begins to flow at the feedpoint of a dipole into one of the legs, it travels along the length of the wire until it hits the open end of the dipole. Because the wire has a finite thickness, there is a small amount of self capacitance present at the end. Since this capacitance does not present the same impedance at which the current was flowing, it forms an impedance discontinuity. Any impedance discontinuity forms a complex reflection coefficient that sends (in this case) all of the current traveling in the opposite direction.

Once this reflected current reaches the feedpoint of the antenna, the current standing wave pattern on the antenna fully is established. It has a near sinusoidal shape.

Despite the very complex wave mechanics, we can still reason that any resistive losses attributable to the trap are largely due to the current passing through the trap. The challenge though is in describing the current profile associated with the trap. Most of the credible analysis you will find in this regard uses computer modeling based on NEC to assess the losses. Unfortunately, I have not found any credible field measurements that have validated the NEC modeling of trap loss.

Most of the well constructed NEC models suggest that a reasonably constructed trap will have losses << 0.5 dB. One such example is this analysis by W8JI. It is notable however, that through the use of bold type and lots of exclamation marks, there seems to be implicit surprises and contradictions noted by the author. Perhaps some of this is attributable to no apparent consideration of the underlying wave mechanics.

Then just when you start to get a grasp on the wave mechanics, it turns out that the inductor itself can have standing waves along its length. Here is an interesting lab picture from Dr. David Knight that shows a wave traveling along an inductor is reflected at the impedance discontinuities that occur at the ends of the wire of the inductor. The picture shows a gas discharge tube in close proximity to an inductively excited coil: 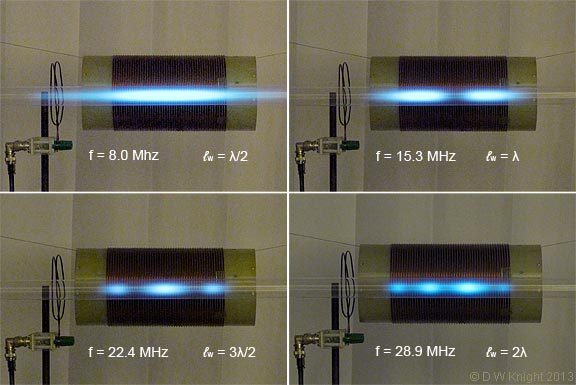 This suggests that a more rigorous analysis should include any standing wave effects associated with the trap itself.

"The ARRL Antenna Book" uses the lumped circuit model for HF loading coils which is an inaccurate thing to do in a distributed network circuit with reflections. The helix model in EZNEC presents a much more accurate picture as does the distributed network model or Maxwell's Equations.

My web page at www.w5dxp.com has a lot of information on HF loading coils, some that contradicts the conventional "wisdom" on the topic. In general, an HF loading coil can be treated somewhat like a transmission line with a characteristic impedance and electrical length. There is also a largely ignored current "bulge" inside a loading coil that affects losses in the coil. That "bulge" can cause the loading coil to have the highest standing wave current in the system. Notice how "The ARRL Antenna Book" has the current decreasing in the bottom section between the feedpoint and the bottom of the coil and a constant current through the coil while, in reality, the standing wave current actually increases in the bottom section and increases even more through the loading coil. There's just too much information to be included here. Please visit my web page at www.w5dxp.com and digest the articles on loading coils.

Calculating the current distribution on the antenna might be a way to determine the radiation resistance, but to arrive at efficiency will require incorporating loss in the equation. It will be tricky: as Cecil notes the current in the trap could be quite high. Depending on the kind of trap there may be significant dielectric losses to take into account. Ground losses are also relevant and quite site-dependent. Ultimately the complexity is high enough an empirical approach may be more feasible.

I would note a low SWR across a wide band suggests low efficiency. A plain half-wave dipole made of thin wire should have a 2:1 SWR fractional bandwidth in the neighborhood of 6% if losses are low. Loading coils should reduce that bandwidth. So if your trap dipole has a bandwidth wider than that, it's a fair inference that antenna efficiency isn't great.

Not the answer you're looking for? Browse other questions tagged antenna-theory dipole efficiency .

5
What happens to the "Yo-Yo Tenna" when you coil up its ends for use on higher frequencies?
7
How does Wi-Fi antenna work?
2
Feedline and balun for 80m horizontal delta loop
11
What is the advantage of making an antenna resonant?
5
What is the proper way to electrically wire in a loading coil to a vertical antenna?
4
Dipole loading coil winding directions?
3
What is an expected SWR plot for a trap dipole?
5
How does this W6NBC "derivative of the classical slot antenna" work?
5
What do you call antenna that combines multiple Hustler resonators (using a VP-1) above a shared mast?
3
How does the material of a fishing-pole mast affect antenna performance?