Why long wire antenna length shouldn't be a multiple of λ/2?

Numerous sources say that LW length shouldn't be a multiple of λ/2 for any frequency in interest. This will cause the antenna to have a high impedance at this frequency. Since the coax cable impedance is 50 Ohms, we will get a high SWR. I get this part.

What I don't get is why the antenna will have a high impedance in this case and low impedance otherwise. It is my understanding that it has something to do with standing waves and voltage nodes. However when I tried to investigate this question further I've found only a lot of formulas, and since I'm not a mathematician this is where I stuck.

Could you please explain why the antenna works this way as if I was 10 years old? Or maybe name a book or article that does this.

A real antenna is more complicated, but I believe the insight you seek can be obtained by learning about a simpler case of transmission line stubs.

Consider what happens when a DC voltage is applied at one end of a transmission line, and it's unknown what's connected at the other end. It this is a 50 ohm line, that means for every 50 volts applied, 1 ampere of current will flow initially. That voltage wave propagates down the line until reaching the other end.

When the initial wave reaches the other end, if the line isn't terminated by a 50 ohm resistor, then the initial 50 volts per ampere is "wrong" for that termination. Say it's a 100 ohm resistor. Ohm's law dictates that for every 100 volts across this resistor, 1 ampere must flow through it. But when the wave arrives, we have 50 volts, and 1 ampere. How can this be resolved?

This change then propagates back down the line towards the resistor. The superposition of all these waves that have happened now brings the conditions at that end closer to 100 volts per ampere, but we're still not there so another reflected wave is set up. The voltage source makes another adjustment to its output current, and these reflections continue on forever, each time approaching 100 volts per ampere. In practice they happen so fast that it's basically instant, and we just ignore this process of how voltage and current settle to equilibrium.

But when the voltage source is AC, and the transmission line is a significant fraction of the wavelength, now the time it takes to reach this equilibrium is no longer "instant" compared to how fast the voltage is changing, so we can't neglect it.

A special case is when the transmission line is a half wavelength long. In this case, the time it takes a wave to travel from the source, to the other end, and back is exactly 1 cycle. If we assume the source is a sine wave infinitely repeating, a delay of 1 cycle is identical to no delay at all. So if the transmission line is open at the end, that means voltage must be zero, and all that excess voltage is reflected back at the source. And because the line is a half wavelength long, that means the crest of that reflected wave arrives at the same time the source is at its crest. The two voltages add, creating a very high voltage for a very low current. That is, a high impedance. Ideally infinite, though in practice it will be limited by losses in the transmission line.

Another special case is when the transmission line is a quarter-wave long. In this case, the delay to make a round-trip is a half cycle, so the reflected waves arrive in the opposite phase. This has the effect of "inverting" the impedance: if the quarter-wave line is open at the end, it "looks" like a short to the source. It looks like a short because however much voltage the source tries to generate, it's never enough because the reflected wave cancels the source wave exactly. A very low voltage even for a very high current is the definition of a short.

We can see a couple things going on here. Firstly, as the forward wave travels to the right, it's attenuated by loss. In an antenna, it could be attenuated by radiation.

Finally note at 0.25 wavelengths on the horizontal axis, the peak voltage is almost ±1V, twice that of the initial wave from the source. This is because at this point, the forward and reverse waves are interfering constructively. That some points on the line have a very high RMS voltage, and other points have a very low RMS voltage indicates this line is operating with a high SWR. The SWR is exactly the ratio of RMS voltages between these nodes and antinodes.

Antennas aren't exactly transmission lines, but the general principle still holds. The end of the antenna is like an open line: the current there must be zero because there's nowhere else to go. When center-feeding a half-wave dipole, each leg of the dipole is a quarter-wave long, so the high impedance ends of the antenna looks like a low impedance in the middle, a quarter wave away.

But if the leg(s) of the antenna are a half-wave, this impedance inversion doesn't occur. The source sees not a low impedance but a high one. Not infinite, since theoretically the antenna is still able to radiate. But such a high impedance does create issues in practice: it's hard to match if your transmitter expects a 50 ohm load. 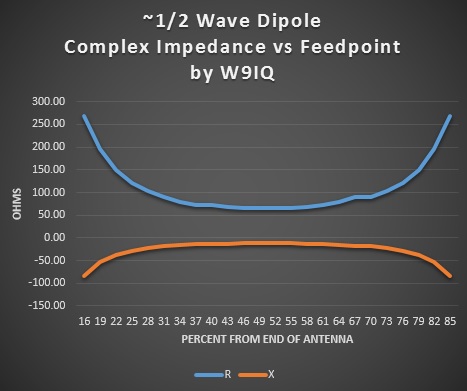 The problem comes in when we finally get to the end of the wire - there are not two places to connect the feedline. But because we can see the impedance rising as we approach the end of the antenna, we can theorize that it is even higher at the very end of the antenna. This can be difficult to match to 50 ohm coax. Since the impedance is very high, for a given amount of applied power, the voltage is also very high in this area:

So care must be taken. For example a 100 watt transmitter could develop more than 700 volts across a 5,000 ohm load when there would be only 70 volts present across a 50 ohm load.

But a much more important consideration is if only one side of the feedline is connected to the end of the wire, how can the antenna radiate if their is no return path? The answer is that typically the exterior of the shield of the coax cable is acting as part of the antenna. This means that the antenna is not a 1/2 wavelength of wire but rather something longer. How long is highly installation dependent but we can say for certain it is longer than 1/2 wavelength. So all of the concern about a 1/2 wavelength antenna is a bit misplaced.

Why So Many Impedances?

The reason a single piece of wire has different impedances along its length is due to reflections of RF energy that gives rise to standing waves. As RF current travels along the wire, it eventually reaches the end of the wire. Since the end is nearly an open circuit, the wave is reflected back toward whence it came. But when it starts its return trip, the phase of the wave is different from the original wave. So the peaks and troughs of the two waves do not line up to each other.

While there are now two waves traveling in opposite directions on the wire, when we take typical voltage or current measurements at any point on the wire, we are observing only the combined voltage or current of all of the traveling waves. Since impedance is simply voltage divided by current, the impedance therefore varies in accordance with the combination of the repective waves.

This discussion applies to standing wave antennas for which there is a forward wave traveling from the feedpoint to the open end of the antenna where a reflection takes place that creates a reflected wave traveling back toward the feedpoint. Since we know that the current is zero at the open end of a wire, it follows that the forward current undergoes a change of sign ($180^o$ phase shift) when it is reflected such that $I_{for}-I_{ref}=\varnothing$ where the wire ends. We also know that the voltage is maximum at the end of an antenna wire so it follows that the reflected voltage is in phase ($\varnothing^o$ phase shift) with the forward voltage such that $V_{for}+V_{ref}=2(V_{for})$ where the wire ends. The forward wave undergoes a $90^o$ phase shift in 1/4 wavelength of wire and so does the reflected wave on its way back to the feedpoint.

If the antenna is 1/4 wavelength between the feedpoint and the open end of the wire (e.g. one-half wavelength dipole) then the forward and reflected currents will be in phase at the antenna feedpoint such that $I_{for}+I_{ref}=high$ $current$. The forward and reflected voltages will be $180^o$ out of phase such that $V_{for}-V_{ref}=low$ $voltage$. The result is a low resistance at the antenna feedpoint, e.g. $(V_{for}-V_{ref})/(I_{for}+I_{ref})=50$ $\Omega$.

If the antenna is 1/2 wavelength between the feedpoint and the open end of the wire (e.g. one wavelength dipole) then the forward and reflected currents will be $180^o$ out of phase at the antenna feedpoint such that $I_{for}-I_{ref}=low$ $current$. The forward and reflected voltages will be in phase such that $V_{for}+V_{ref}=high$ $voltage$. The result is a high resistance at the antenna feedpoint, e.g. $(V_{for}+V_{ref})/(I_{for}-I_{ref})=5000$ $\Omega$.

This answer is deliberately simplified by limiting the math to in-phase and $180^o$ out-of-phase signals. A more generalized discussion would require phasor (vector) math with which many hams are unfamiliar.

Not the answer you're looking for? Browse other questions tagged antenna antenna-theory wire-antenna or ask your own question.

5
Are there reasons why a receive-only wire antenna should not be λ/2 in length?

2
How does the antenna length affect signal transmission/receipt in different bands?
5
Antenna Efficiency
1
Exactly why do some SWR meters give a changing reading depending on the length of coax used to connect to an antenna?
5
Why a capacitor is needed in Fuchs antenna?
2
resonance vs resonator in antenna
3
Can I use a 1/4 wave decoupling stub to enable mounting of a vertical yagi on a metal pole?
5
(When) does a transceiver re-reflect 100% of reflected power?
2
Why do ham radio operators say that a full wave dipole isn't resonant?
0
Does antenna Q cause distortion?
4
Antenna tuner at the transceiver output confusion