This question is very similar Yaesu G-5400B rotator controller problem, with a bit of a twist.

I'm getting a consistent 5.84 VDC up to the rotators and the expected 0-5.84 VDC at terminals A1-3 and E1-3, and thence to VR2 and VR4. But tracing those voltages through the circuits to the eventual outputs at DIN pins 1 and 6 (to my computer interface - a K3NG device) I'm only seeing a maximum of 1.5 to 2 VDC if I rotate VR2 and VR4 to minimum. (The meters are reading just fine, and are stable.) Thoughts on this? Perhaps the OpAmps Q3 and Q4 have failed? They're obviously still passing voltage, just not 0-5.84 volts. I'm hoping it's something simpler.

It is unlikely that both op amps have failed, especially since the other half of each op amp drives the meters, which you stated are still working properly.

I am initially concerned that you are seeing 5.84 VDC at the rotor. The input to the range pots that are in the rotor should be ~8 volts. This may indicate that you have a wiring error or a high resistance wiring connection somewhere. Check the voltage at the rotor control box A1 and E1 with and without the rotor connected. It should stay at ~8 volts in both cases.

If E1 an A1 are not at 8 volts with the rotor disconnected, this would indicate a problem with the 8 volt regulator circuit, including Q2. Given the age of the rotor, it could be that C1 is no longer up to spec. Check this with volt meter across the capacitor. It should read near 0 AC volts and near 12 DC volts.

To adjust the output voltage on the DIN connector, you must adjust VR3 and VR4 (you stated VR2 and VR4).

Remove the K3NG device from the DIN plug. Check that the op amp inputs (Q3 pin 3 and Q4 pin 3) follow the voltage output of VR3 and VR4 respectively. If they do not, then check the clamping diodes D12, D13, D24 and D25 for correct functioning.

If you find nothing amiss in the prior step, check the op amp outputs (Q3 pin 1 and Q4 pin 1) to see that they follow VR3 and VR4 respectively. If not, check the output clamping diodes D10, D11, D22 and D23 for correct functioning.

If you find nothing amiss in the prior step, then suspect a problem in the K3NG controller or the interconnect cable wiring. A common problem is incorrect pin numbering for the interface cable:

Based on the comments, here is a brief circuit description of the relative part of the circuit:

Q2 is a voltage regulator that feeds 8 volts to the position sensing pots in the rotor. The resulting voltage back to the controller ranges from 0 to ~7.8 volts. The maximum voltage will be less due to the resistance of the wiring between the controller and the rotor.

The output voltage from the rotor pots is fed into VR3 and VR4, each of which is in series with a 4.7k ohm resistor. The output voltage of VR3 and VR4 is conditioned, divided in half, and fed into an op amp circuit with a gain of ~2. The output of the amp amp is further conditioned and current limited by a 220 ohm resistor before being fed to the DIN jack on the back of the rotor controller.

Here is the schematic for the az-el rotor: 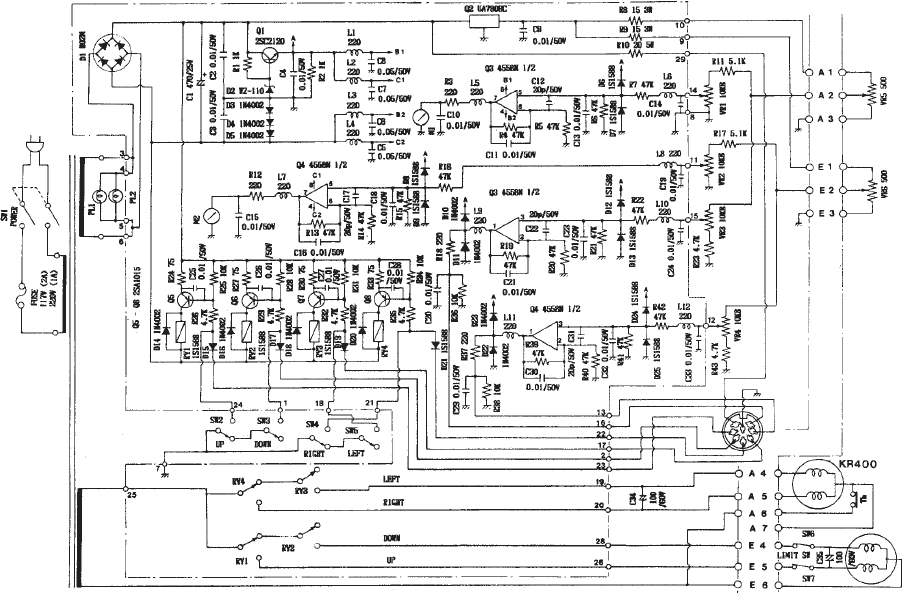 Not the answer you're looking for? Browse other questions tagged yaesu equipment-troubleshooting antenna-rotator or ask your own question.