Why does a Class-C non-linear power amp distort SSB but does not distort AM?

Can someone tell me why exactly a transistor non-linear power amplifier will amplify an AM signal without noticeable distortion, but will distort an SSB signal, giving the familiar scratchy sound where low amplitude audio is broken up and choppy.

Keeping in mind that a 100 % modulated AM signal has voltage levels at zero like this :

A class C amplifier indeed distorts AM and causes widespread splatter just as it does for SSB signals. BUT if you have a class C amplifier and apply modulation to it by superimposing the modulation signal on the supply voltage you can produce excellent AM modulation. The graph "150% modulation" in the question is not what one normally would see. With typical AM modulators the signal would go to zero and not reverse phase when the modulating signal goes negative. By use of a schottky mixer one could do AM that reverses the phase for negative modulation voltages and that would eliminate the splatter, but for the question about class C amplifiers that is not relevant.

There is however a trick, variable class amplifiers. Easy with tubes. Use a grid resistor that would change the operation point when grid current flows. Set the amplifier to operate in class AB, or maybe class B as long as the grid current is zero. When the grid current starts, a suitable resistor would bring the tube(s) into class C. The important thing is to make the time constant for DC on the grid much smaller than the time constant of the signal. Our AM or SSB signals might contain frequencies up to maybe 5 kHz so it is necessary that the time constant on the grid corresponds to at least 500 kHz for variable class to work as intended. The amplifier should be tuned for a class C signal. The transfer function is a bit curved not only at low levels, but also at high levels, but it is possible this way to get some extra power without causing problems to neighbouring hams.

The important thing is the transfer function. Output power vs input power. A properly tuned class C amplifier has a transfer function that is zero for powers from zero to perhaps 25% of maximum power. Then the function is a reasonably straight line. In this region grid current is zero or small. At higher powers the transfer function bends which of course causes distortion. Normal operation in class C is to drive the amplifier deeply into saturation, but if driving the amplifier mildly into saturation the distortion will be of low orders and not harmful - but peak power would be higher than from a common linear amplifier. When operating like this one needs an oscilloscope with two power detectors. One for input power and one for output power so one can see the transfer function on an oscilloscope in x vs y mode. In variable class, the amplifier would operate in class A until grid current occurs. As grid current increases the class would change into AB, B and ultimately C. The transfer function will be a little S-like. Bending softly at both ends - at the low end depending on the idle current. It is extremely important that the time constant on the grid is very much shorter than the time constant for the modulation. As a contrast, a conventional amplifier design aims at best possible linearity. That is often associated with a very sharp corner at saturation. That would be a VERY bad source of splatter in case saturation is reached. Even worse is amplifiers that have a high impedance for the grid bias with a large time constant. It would change the grid bias and bring the amplifier into class C which would cause disastrous splatter. Not uncommon - at least not in the tube ages from where I have my practical experiences.

This URL:https://www.radio-electronics.com/info/rf-technology-design/am-amplitude-modulation/modulation-index-depth.php provides a picture of 100% AM modulation. The image showing "Amplitude modulated index of more than 1.0 i.e. over-modulated" is however false. The same error on over-modulation is displayed here: https://electronics.stackexchange.com/questions/107128/what-is-overmodulation it seems that this idea has become widespread, but it is not true at all. What we have in real life is demonstrated here: https://www.quora.com/For-the-AM-modulation-modulation-index-not-be-greater-than-unity-is-it-true-or-false Rather than changing sign, the signal abruptly goes to zero when overmodulation occurs. That would cause wideband splatter. Must not ever occur!!!

In modern hardware one might produce AM by use of a schottky mixer. Then the signal would behave as in the links that I claim to be wrong. The resulting AM would most probably sound bad in a conventional AM detector, but I think it would sound perfectly OK in a synchronous detector. Such a signal would not cause splatter and might actually be an interesting new modulation mode, but just labelling it AM would probably lead to confusion.

An AM broadcaster produces AM with a high efficiency class C amplifier that is modulated on the supply voltage. The supply voltage can not go negative. Today it would be possible to reverse the phase by 180 degrees at the point where the supply voltage reaches zero and amplify the signal 180 degrees out of phase proportional to the amplitude as long as the signal is negative. That would be a technology halfway to double sideband with suppressed (but nonzero) carrier. Easily received with modern synchronous detectors. Skipping the carrier saves 6 dB of power. In real life much more since modulation is not near 100% most of the time. I am pretty sure we will not see this kind of modulation in the broadcasting world since digital modes give significantly bigger advantages. I think conventional AM will live for still quite some more time - and that modulation index above 1 will not occur in the broadcasting world. Modulation index up to perhaps 1.8 could be something fun for radio amateurs to experiment with. Conventional AM, max 95% modulation (or so) is inefficient on a typical linear amplifier (as compared to a plate or screen+plate modulated class C amplifier. With 180% modulation one would be fairly close to DSB with a suppressed carrier - and that might be power efficient.

Trying to feed an SSB (or AM) signal to the gate or grid of a Class C amplifier will only produce an output on SSB peaks, which severely distorts the signal. And at the same time, out-of-band products ("splatter") is produced.

A Class C amplifier should only be gate- or grid-driven by a signal whose amplitude does not vary, such as FM. In AM, it is only amplifying the carrier signal.

In AM, the Class C output stage is always run at a constant power level and the audio modulation is commonly applied to the anode (or drain), never the gate or grid. The RF drive is constant, and the grid is biased several times the cutoff bias, which significantly increases its efficiency (over 30% as compared to a linear amplifier).

The modulated output signal has voltage levels at or near zero only as a result of applying the audio to the anode. A Class-C amplifier is only for amplifying the unmodulated carrier. It never should be used to amplify an AM signal.

From the Wikipedia article on AM:

In a class-C amplifier, less than 50% of the input signal is used (conduction angle Θ < 180°). Distortion is high.

Anode (plate) modulation. A tetrode's plate and screen grid voltage is modulated via an audio transformer. The resistor R1 sets the grid bias; both the input and output are tuned circuits with inductive coupling. 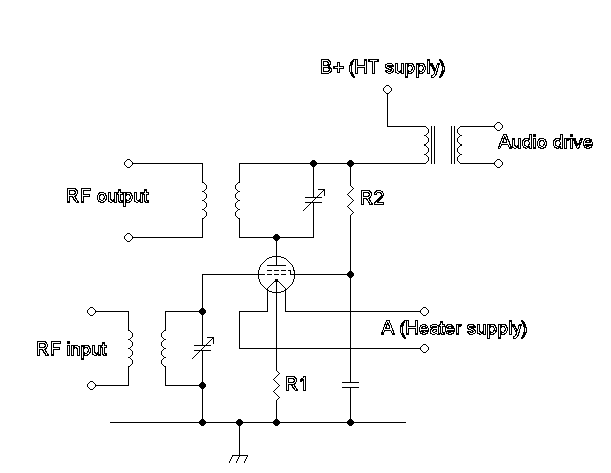 This is a vacuum-tube tetrode, but the very same principle applies to a triode or any solid-state class-C amplifier.

Not the answer you're looking for? Browse other questions tagged electronics amplifier ssb am or ask your own question.

14
What is a linear RF amplifier?

15
Why does SSB have the hollow voice sound?
21
Why do we use LSB below 10 MHz and USB above 10 MHz when operating SSB HF?
7
Efficient BPSK31 amplification
3
Power efficiency of SSB-Large carrier
5
Why needs a carrier signal on receiver (SSB)
7
How to calculate if low-pass filtering is sufficient?
3
Why does the output power of some AM transmitters increase when modulated and of others decrease?
16
Why do we not use AM and FM at the same time to transmit more information?
1
How to reduce voltage ripple of a linear power supply?
4
Why does an RF Amplifier fail when the SWR is high?