This task is our milestone, even the lecturer doesn't know how to do it, I will be grateful for even the smallest clue, thank you in advance.

There are given two, identical, parallel, short dipoles perpendicular to the OX axis connecting their centers, located at a distance of λ / 4 and supplied with a phase shift of π / 2 (figure below). How much higher is the energy flux density (in dB) sent in the direction of the positive half axis OX by the described pair of dipoles from the density of the power jet sent in the direction described by the azimuthal angle φ = 52 ° and the angle of elevation Θ = 37 °? 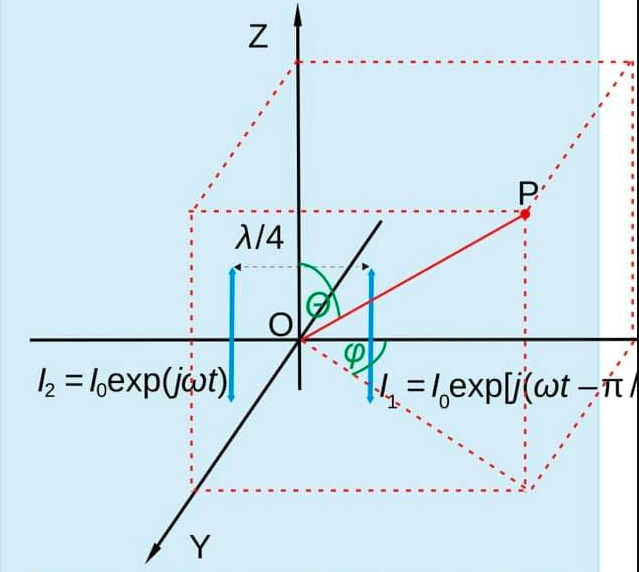 Here are some hints :

1) two dipoles usually interact strongly, so the current on one is dependent on the current in the other. This is how a Yagi Uda antenna works - the elements are mostly parasitic, i.e. not driven by a source, but still carry current.
In this case you don't have to worry about this at all. The two currents are given.

2) the fields at some point in space are the linear superposition of the time-varying fields due to the current in each element - without considering the other.

3) you need to find an expression, in a textbook or online, for the retarded electric potential of a half wave dipole. This is the electric (or magnetic) field in space due to the current on the element.
Most importantly, it contains an $e^{-j \beta r}$ term, which is a the delay in time caused by being some distance away. Hence "retarded". This term is key to adding the two fields correctly. You'll need to find $r$ for each dipole, for each of the positions you want to find the total field... this will be an expression in $\theta$ and $\phi$.
It also contains a $1/r$ term which you will ignore, because when you're far away, these terms are identical. And a $sin^2\theta$ term, which is the radiation pattern.
Note there is no $\phi$ term because each dipole radiates equally in all directions. The pattern of the array will come out when you find the vector sum of the fields.
Also some constants which aren't important if you're looking for the ratio of two fields.

4) You only need consider Theta-directed fields - and most derivations will only consider these anyway, in the far field. In the near field there are radial fields too, but these die off as $1/{r^2}$ so don't matter in the far field.

5) finally, the power flux density is the square of the electric field (times a constant).

3
Spacing between elements on a Yagi antenna
11
What is a Gamma match in the context of the driven element of a Yagi antenna?
5
Connect Printed Yagi-Uda Dipole Array with Balun to coaxial cable correctly
2
Should I ground a 2 array crossed yagi-uda antenna?
2
Would a 2.4ghz yagi antenna work for Ham Radio?
5
Can half of a directional antenna (Yagi-Uda, HB9CV) be replaced by a ground plane?
2
Yagi Antenna - Elements Length
0
Stacked Yagi Gain calculation
4
3D Printed yagi antenna
2
Yagi antenna isolation from other Yagi antennas