Any ideas on what I can do to fix this?

Sounds like the router is getting front end overload. Either your OCF dipole is too close to the router, or you are getting common mode current on the coax and it is radiating along the coax.

A balun on the coax in the right place might help if it is common mode current.

I agree with user10489's answer but would like to expand a bit on what to do about it. A signal of some sort appears to be interfering with something associated with the router and there does not seem to be enough information to pinpoint an exact cause.

As stated by user10489, adding a balun or common mode choke in the appropriate place(s) on the feed line (see http://audiosystemsgroup.com/RFI-Ham.pdf for far more information than I could possibly describe) would probably help.

A good resource on common mode chokes is http://www.yccc.org/Articles/W1HIS/CommonModeChokesW1HIS2006Apr06.pdf . Far more information than could be described here.

Also, check all of the feedline, tuner, and antenna connections. A bad connection could be the cause of the interfering signal.

Before adding hundreds of € worth of common mode chokes across every wire in your house, check the connections between your radio and antenna and then run the following test:

To add to the excellent answers here, here's what I did here to solve this problem.

This common-mode LAN choke is 14 turns of CAT5e wound on a 2.4" OD Fair-Rite toriod core made of type 31 ferrite. Mouser Electronics and Newark Electronics stocks them, about $7 each.

These can also be used for choking any common-mode RF on the router's power supply ("wall-wart") cable. 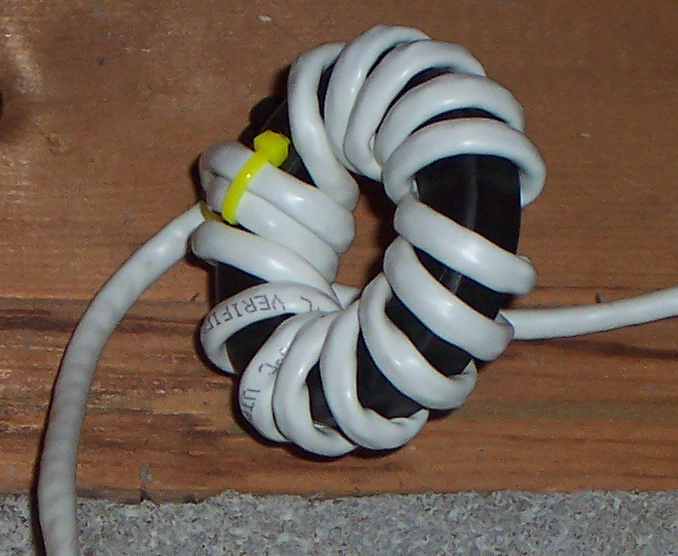 I already have a similar coax choke at the feedpoint of my low backyard dipole, except there are fewer turns and about four of these chokes stacked.

To add one more inexpensive troubleshooting suggestion: The RF may not be coming in via any typical signal path, whether wifi or CAT5. A variety of issues such as poor mains grounding, distance from the mains ground point, faulty GFCI outlets, or just a stretch of mains wiring that happens to be a resonant length on an HF band can cause a significant amount of RF to get onto the chassis of the router.

Computers in general tend to look poorly upon intruding RF (which can look like or interfere with clock signals) on their ground plane, and in technical terms, will "freak the heck out". I could crash my wifi router at my last apartment by transmitting specifically on 15m, despite living in a new building that was up to code. In my current house, the same router has no issue with 15m due to a different antenna configuration and different mains wiring.

Adding an AC line filter to the mains supply of the router will eliminate any RF that may be on the mains, and has the added bonus of cutting down on RFI to your receiver from cheap power supplies. I usually buy an inexpensive power strip and cut the cord, then install the line filter on the power strip cord for convenience. This combined with wrapping a few feet of the router's DC power cord around a type 43 toroid fixed the problem I had with the wifi router in my apartment. If you have a lot of noise on your receiver that goes away when operating your radio via battery, you may also find that a line filter on the cord of your radio PSU helps to cut down on that noise, as it can travel both directions.

Not the answer you're looking for? Browse other questions tagged rfi wifi or ask your own question.

35
Can my neighbor's ham radio antenna be interfering with my internet signal or is my internet provider just throwing blame elsewhere?

13
How to operate IEEE 802.11 WiFi AP within the amateur radio service?
11
How to reduce RF in the shack when using vertical HF antenna (no radials)
5
Theoretical Wifi antenna not working for the expected range
6
How to stop interference on shortwave radio when connecting to a computer
5
What is the purpose of limiting radio output power?
2
FFT showing evenly spaced signals when tuned to ~56 MHz down to 25.680
5
Is this the Correct Ferrite Core to Reduce RFI as a Common Mode Choke?
0
Understand Radio Pattern of a WIFI antenna
3
How does FM station have fixed frequency when FM modulation changes the frequency?