I have designed a LoRaWAN gateway and it is under testing. I have been using omnidirectional 3dBi dipole antenna FRP (Fibre-glass Epoxy Antenna) for 868 MHz.

Below is the picture of my antenna (please ignore the specification in the picture): 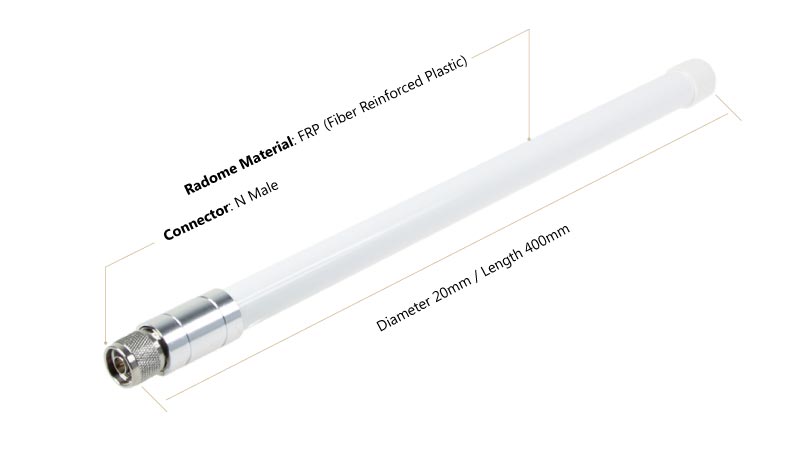 I want to know how to calculate height required for getting a particular range. What would be minimum and maximum height for my setup? And what factors limit the height of the LoRaWAN antenna?

I have been reading about Fresnel Zone and understand that any obstacle in the zone will limit the range and solution would be to increase the height of the antenna or the end node. However, since I don't have much knowledge with the antennas, I think i might be missing concepts like fresnel zone. Please help me.

I came across another interesting concept. It limits the range of the LOS communication due to curvature of the earth. The link over here relates range to height of the antenna. According to the calculator presented in the website, I shouldn't go below 10 meter in height, to get atleast 10 km of the range.

At VHF and above, communication is easiest when the stations have a clear line of sight. Without line of sight, a link is achieved only by reflection and diffraction off/around other objects in the environment, and this must be offset by higher transmit powers or antenna gain if there is insufficient margin in the link budget.

Estimating coverage in the absence of a clear line of sight requires some non-trivial modelling. I used to link to some tools using the Longley-Rice model, however I can no longer find any that are freely available.

However if you do have line of sight, then there are some simple calculations that can be done.

At long distances, Earth's curvature limits the line of sight distance. On flat terrain, the radio horizon describes the maximum distance for line-of-sight communication. It can be estimated by:

The horizons from each end add, so if one station has an antenna a 2 meters, and the other at 10, the maximum line of sight distance is approximately 18.8 km.

There is practically speaking no maximum height, so mount the antenna as high as you can.

Radio waves have a much longer wavelength than visible light and thus can't be focused to a tight beam like a laser pointer. Consequently, to minimize loss it's important not only to keep clear the direct line between the stations, but some area around that line as well. As a design rule of thumb, the area that "should be kept clear" is usually defined by the first Fresnel zone, which is the locus of points where a ray reflected off that point would arrive with a 180 degree phase delay compared to a direct ray. It's an ellipsoidal region between the antennas which is thickest in the middle, with a radius (in meters) of:

At 868 MHz and at your maximum range of 10 km, this gives the 1st Fresnel zone at its thickest point a radius of 29.3 meters, meaning you should hope to achieve a clear line of sight between the stations, and also clear the zone up to 29.3 meters around that line, especially in the middle.

6
How to determine antenna height for given HF frequency and coverage radius?
4
Height and feedline loss tradeoff for VHF
1
Antenna for small balcony
5
Running ladder line through window from inside shack to outside dipole antenna - what to watch out for?
2
4G extension cable and antenna height?
0
Antenna Type of a Chinese Antenna
1
Raising height of inverted V by 2 meters
0
How does the height above ground of a VHF/UHF receive antenna affect the r-f voltage at its output terminals?
5
Measurement of antenna with VNA does not match its specs