"Coaxial capacitors in line” in E4E04?

I've been studying the U.S. license examination question pools. For the most part, it is reasonably obvious what the questions and answers mean even when I am not yet able to come up with the answers on my own. However, the correct answer to this question in the Extra class pool is confusing me:

E4E04 (D)
How can conducted and radiated noise caused by an automobile alternator be suppressed?

What is the purpose of specifying “coaxial” capacitors? Why does it say “in line”, which in the absence of further information I would interpret as “in series”? I would think that low-pass rather than high-pass filtering would be desirable.

Is this just a sloppily phrased answer, or is there something subtle here?

What they mean by "coaxial capacitor" might be described by more people as a feed-through capacitor. For an example, see Tusonix 4300-002LF at Mouser. The datasheet contains these images, which are pretty informative:

Thus, the two leads are effectively a wire, ideally having zero impedance between them. However, this conductor also has some capacitance to the case, which is usually connected to ground. This particular part is designed to be dropped in a hole the size of the case, then soldered in place. Another design has a tab on the case for screw mounting.

The advantage of this arrangement is that it's possible to use as a filter on some wire with high $\mathrm{d}v/\mathrm{d}t$ without creating a stub which could also act as an EMI radiator. It's also possible to preserve the continuity of a shield or enclosure, and get a really good connection to it. With an ordinary capacitor, the ground connection would go through a lead, which would have more inductance and resistance, reducing the filter effectiveness. 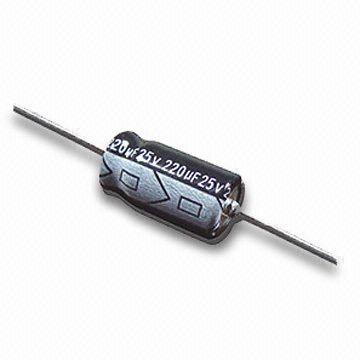 There's nothing special about this capacitor. Sometimes this arrangement of leads just fits better.

While writing the question I found a picture that clarifies the “in line” part on this web page I found in a search, Radio Frequency Interference: A small vessel guide: 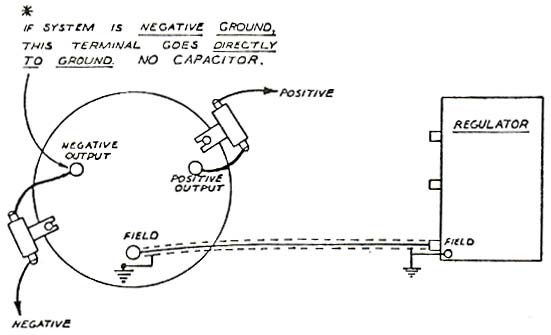 So, a coaxial capacitor in this context is in fact a three-terminal device of a sort, and this explains why it could be described as being “in line” with the alternator leads.

This doesn't explain why a coaxial capacitor is specifically good for this application, though.

As to the structure of the component, I imagine placing the leads on opposite sides of the capacitor simplifies construction and reduces the chance of the leads arcing over considering even a modest alternator these days produces 90+ amps.

Not the answer you're looking for? Browse other questions tagged united-states license rfi filter or ask your own question.

2
How to eliminate alternator whine?

5
Is Alaska considered to be located north of line A?
2
Low frequency noise on ground line. Why?
1
Transmitter won't transmit with antenna installed
5
How can the design of an RF filter also encompass impedance matching?
6
Feed-through Capacitors
1
How can I improve my Es'Hail 2 reception?
7
DIY SA612 + RTL-SDR HF receiver: good on laptop, but huge wideband noise on Raspberry Pi
1
What kind of filter should be used at the output of HF linear amplifier?
5
Wide band TX capable band-pass filter for VHF and Airband