I'd like to build a simple AM receiver for 25 and/or 28 MHz to receive DCF77-formatted time code. It doesn't have to be extremely sensitive or selective - the local clock oscillator will keep time while it cannot receive the time code during my rare HF transmitting activities. Frequency stability should be relatively good (crystal controlled). Could anyone suggest a basic schematic or kit for the purpose?

There's a local 25.000 MHz reference transmitter which has good local coverage, and I'd like to receive that. In addition I'd like to build a version for 28 MHz to receive a local amateur beacon and my own testing transmissions.

Please not that this is not the DCF77 station (77.5 kHz) in Germany, this is a local reference transmitter on 25 MHz which just happens to use the same time code format.

I'd prefer a traditional standalone receiver (one that doesn't require a computer for SDR), since I'd like to decode the time code in a low-power Atmel microcontroller.

Since OP requires MCU, doesn't have to be extremely sensitive or selective and the 'local' transmitter, one suggestion is

Alternately, to above DDS with Arduino, another suggestion is the ProgRock and (manual here) which is an interesting solder kit and also fulfills OP's Atmel chip requirement. It uses another DDS chip, Si5351A and outputs square wave instead of sine wave as above chip. Square wave has less favorable spurious response but no problem under OP specified conditions. LPF can be added to make it sine wave.

As OP mentioned building stuff, yet another alternative to consider is to get a HamitUp, removes the oscillator and replace with signal, with suitable level adjustment (no need to be very accurate), from either of the two DDS plan.

After building it, both DDS become a signal generator that you can use it for other task. Like WSPR and a few other digimode transmitter, just change software. Tie 2 balloons and flew around the Earth S11

Here is plan for a standard DCF receiver with Arduino decode software. Hardware ant with amplifier module. Signal from the mixer can be coupled to the antenna rod by 3 turns winding at the far end (away from existing coil) of the ferrite rod 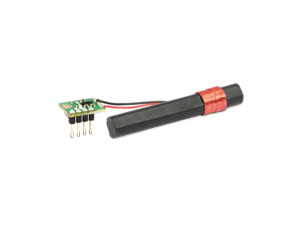 10 MHz WWV Receiver Experiments has a basic schematic for you as well as some good detail.

However, as per Wikipedia, the 25 MHz broadcasts were discontinued in 1977. I also confirmed at the WWV website that 25 MHz is no longer used.

The SoftRock SDR kits could qualify as "simple", if you mean simple electronics. Some of them cost as little as $10 USD. They have fixed-frequency crystal oscillators, and you could probably swap the crystal for a nearby frequency in any of the kits as desired. The slightly more expensive and higher part count kits have a LO variable from DC to VHF and are usually limited by the input filters.

Of course, the simplicity of the electronics is balanced by the complexity of the computer necessary to demodulate the received signal, and you'd have to become familiar with SDR operation, but maybe you don't mind.

I may be overlooking RF concerns that come into play as you get closer to VHF here, but since you're looking at AM modulation, could you take inspiration from some of the simplest "crystal radio" designs?

These don't even use a "crystal" in the modern sense of crystal oscillator — rather the crystal refers to the "cat's whisker" and galena detector of the earliest designs, usually replaced nowadays by a geranium diode. All the tuning essentially happens in the antenna matching.

The idea is basically: filter out everything but the desired signal, then use a diode to rectify that to a varying DC signal, which then gets filtered down to just the baseband (sometimes inherently, in the case of a radio earpiece).

So depending on the signal strength of your local station, and the feasibility of implementing a resonant coil with sufficient selectivity at 25MHz to pick out your signal, you might be able to do the rest with a fast enough diode rectifier directly on a microprocessor ADC pin.

Those might be big contigencies, and maybe what works at 1MHz for kilowatt broadcast stations might not be practical for weaker 25MHz work. If I had to hazard a guess at the first thing to go wrong, it'd be implementing a filter with high enough Q to eliminate the other voltages flying around near your desired station.

I recommend looking at http://playground.arduino.cc/Code/DCF77 and http://forum.arduino.cc/index.php?topic=102039.0 I plan to build a few units with this and a DS3231 RTC, so they can supply a time array to anything I wish over serial connection.

Not the answer you're looking for? Browse other questions tagged hf diy receiver am .

9
Is there a simple, DIY, antenna suitable for HF receive only?
5
Low parts count CW HF receiver?
5
Receive Data on Specific Frequency
3
How to identify a practical HF communication receiver?
4
Will I get cleaner keying by keying the oscillator, or interrupting the amplifier B+?
0
How to make simple AM detector using an LED?
1
Can the transmit and receive functions of a boat anchor transceiver share the tank circuit?
3
Looking for criticisms on my VNA-like SWR meter I am designing
6
Simple circuit for acceptably clean CW in homebrew TX?