Why does not a bigger antenna receive more power?

According to http://www.antenna-theory.com/basics/aperture.php, the power received by an antenna depends on the power density of the incoming wave, the wave length (which I consider to be fixed) and the antenna gain. So if I want to receive more power I need to build an antenna with higher gain, but this means that the antenna would be much more directive. Let us say that I want to stick with a non directive antenna, because I do not know in advance the direction I will be receiving from.

According to the equations in the webpage, there is nothing I can do to improve the received power once I fix wave length and gain. However, this strikes me: I would expect a bigger antenna to intercept more RF power, and thus making more available at its terminals. Why does not this happen? Are there tricks (maybe using non linear components?) to actually collect more incoming RF power in all directions, without making the antenna directional?

By reciprocity, we can flip this question around and ask it from the perspective of the transmitter. Assuming we've done the obvious like minimize feedline losses, and we're holding the geography, frequency, and so on constant, how can we get a higher fraction of the transmitter's power to appear at the receive antenna's feedpoint?

If the transmitter has some omnidirectional antenna like a vertical monopole, most of the radiated energy is going in the wrong direction to ever reach the receiver, and is thus lost.

It should be intuitively obvious from the law of conservation of energy that a higher gain is the only option here, which if losses are already minimized means a higher directivity.

Consider you have an omnidirectional antenna like a vertical monopole, and the received power at the feedpoint is 1μW.

Wanting to receive more power, you install another identical antenna beside it. This 2nd antenna, having a nearly identical path to the transmitter as the 1st, receives another 1μW.

In total you're receiving 2μW, but to get the full 2μW combined into a single port requires that the phases of the two antennas are adjusted so they add coherently.

Unfortunately, this means the array has acquired more directivity. While some phasing arrangement may work for one transmitter location, there will be other possible geometries which place the transmitter closer to one of the antennas and farther from the other, thus altering the phase at which the signals combine. Thus the antenna array is no longer omnidirectional.

So, while a longer wire, or a larger array of antennas will indeed intercept more power, it's not possible to coherently combine those powers without increasing directivity.

An array of antennas does indeed receive more power, the difficulty is it's often unknown what phasing of the antennas will result in the signal combining coherently. One solution is to make the phasing variable, and to dynamically adjust it for maximum signal clarity.

Modern communication systems (Wi-Fi, cell phones) can do this dynamically by separately digitizing the signal from each antenna, then dynamically adjusting the phasing in software. This is effectively an antenna array that's always "pointed" in the optimal direction, thus obtaining a higher link quality without the disadvantages of a directional antenna.

For terrestrial communications in predominately flat terrain, it's safe to assume the other station is near the horizon, that is, not flying overhead, and not underground, although the direction may be unknown. In these cases it's possible to maintain a omnidirectional (meaning uniform along the azimuth) pattern by increasing the directivity in the elevation axis. That is, making a "flatter" doughnut.

Often this is achieved with a collinear array. A quarter-wave monopole above a ground plane has gain of 5.2 dBi, and a dipole 2.2 dBi: when you see omnidirectional antennas with higher gains they are usually collinear arrays with a "flatter" pattern.

One way to accomplish this is by stacking multiple vertical dipoles or horizontal "halo" loop antennas (or a turnstile array with two straight dipoles at 90°) on a vertical mast. Such an array can have nearly 360° coverage and increased gain over a single vertical or loop.

Such an antenna array can be said to be directional, but in a practical way: it has increased gain at lower angles --towards the horizon-- but decreased gain at the unwanted higher angles.

The antennas are connected using a carefully designed "phasing harness" made from either balanced line (for UHF and above) or coax (usually VHF). They are often used by FM broadcast or television stations.

This is the pattern and gain of the antenna described above: 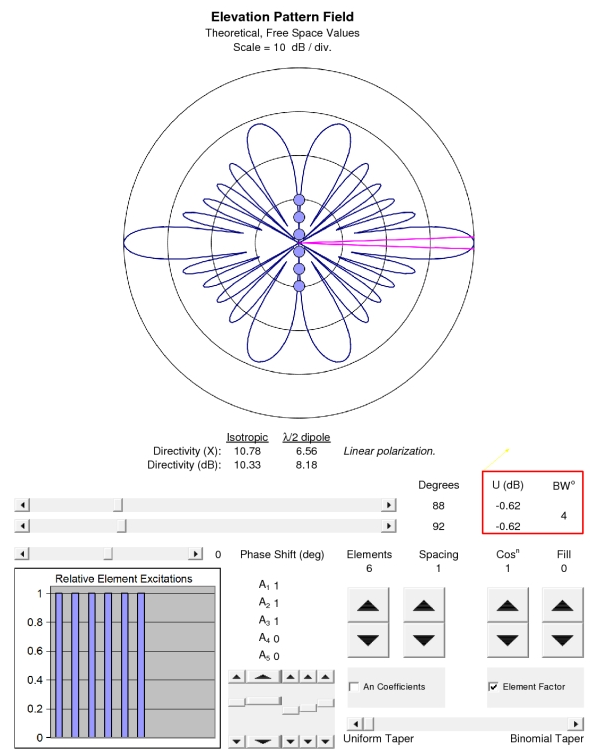 For comparison, here is the gain and pattern of a dipole: 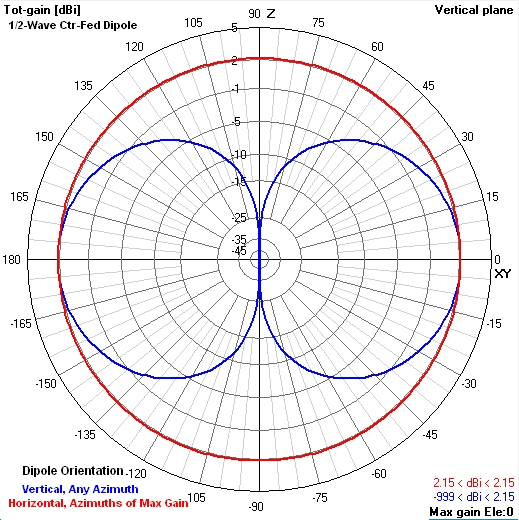 It appears that the stacked array wins, even if it has those high lobes. It has quite a bit more gain at low angles than the dipole.

Let us say that I want to stick with a non directive antenna, because I do not know in advance the direction I will be receiving from.

With this as the starting point, consider that there is no real antenna that has an omni-directional property - so you cannot "stick" with this type of antenna in the real world.

We sometimes think of monopole antennas as omnidirectional but in fact they are far from it. The monopole and its derivatives such as vertical collinear antennas have a omnidirectional pattern in the azimuth but only for a specific elevation. If the elevation angles of the approaching plane waves are not equal, the monopole family will receive these signals with differing gains.

The isotropic antenna is the only truly omni-directional antenna. But this is only a theoretical construct - there are none in existence.

However, this strikes me: I would expect a bigger antenna to intercept more RF power, and thus making more available at its terminals.

In a very broad sense for a given wavelength, the larger the physical aperture of an antenna the greater possibility for it to intercept more power from the plane wave and make this available to the receiver system. But the increase in physical size also alters its radiation / reception pattern along with the feedpoint impedance. So the trade offs need to be considered.

Let us say that I want to stick with a non directive antenna, because I do not know in advance the direction I will be receiving from.

Since all real world antennas start with some directionality, some compromise in this goal is necessary. You may find electronically steerable antenna arrays to be an interesting study in this regard. They can achieve very high gain over a relatively broad pattern. While this gain in a given direction is itinerant in nature, it can be used to find and lock onto a signal source to realize its maximum gain during reception of that signal.

A larger antenna can give you more power and not just more gain. Some examples:

A dish is not an antenna, but part of an antenna system. The antenna in a dish system is aimed at the dish, and the surface area of the dish increases the effective aperture of that antenna. The dish and antenna must mutually focus radiation of interest on each other for this to work. The antenna is said to cover or illuminate the dish. Typically you want a compromise between the antenna's beam exactly covering the dish and its highest gain covering the dish, so typically there is some overshoot with some small gain behind the dish where it falls over the edge. Similarly, the antenna will be at or near the focus of the dish. Note that the curvature of the dish refocuses the antenna, so this may also change gain and directionality.

You can take three directional antennas (for example, a moxon with a 170 degree beam angle, maybe 120 degrees of which is high gain), mount them on a single tower, and couple them together, aiming them in different directions (i.e., spaced at 120 degrees). The result is an omnidirectional pattern of higher gain than a dipole but less directional than the single antenna. Note that in this configuration the apertures of the moxons (mostly) add, not the gains. (There may be some constructive and destructive interference at the edges where they overlap. It also helps the tower isn't shadowing any of them.) (Note that cell towers do this, except that those antennas are typically not coupled and each goes to a separate radio.)

To be effective at a particular wavelength, an antenna needs to have a length that is a significant fraction of that wavelength (ideally 1/2). This is unreasonable for an AM broadcast antenna (590khz has wavelength 520m, ideal antenna would be 260m). To make this a reasonable sized antenna, the wire can be wrapped in a coil. Unfortunately, this severely reduces its aperture. To increase the aperture and make the antenna effective, it is wrapped around a powdered ferrite core which concentrates the fields without making it larger.

18
Why do folded dipoles have greater bandwidth than ordinary resonant dipoles?
3
How do I determine which HT antenna is better based on their very similar catalogue descriptions?
2
Best mobile antenna for the mountains
3
Antenna proximity limit to increasing signal strength via additional receiving antennas?
7
How does Wi-Fi antenna work?
0
Antenna Type of a Chinese Antenna
1
Exactly why do some SWR meters give a changing reading depending on the length of coax used to connect to an antenna?
2
Weakly directive VHF/UHF antenna
3
Is a resonant antenna inherently more efficient because it couples to free space more efficiently?
3
Why does beamforming bring more power to the received desired signal?