What has happened to HF?

Has the HF spectrum become noisier over the decades due to man-made interference? Is this a reason why HF band activity appears to be declining?

HF propagation is not only limited by manmade interference but also by natural phenomena like sunstorms.

Anyway, I'd account that to social and technological reasons:

I find you're in the wrong with your observation of declining activity, however. Last time I talked to larger groups of hams (which was in Friedrichshafen at HAMRADIO'18), they were all totally astonished by the count of contacts made in the last months – all due to FT8. FT8 offers a new exciting technological aspect to ham radio, and hence is used far and wide, with hundreds of thousands of contacts¹.

So, if you ask me, this is all a self-made problem of how ham education is done: Instead of focusing on modern technology, people are taught CW, and proper voice comms conduct, and outdated tech. That does a tremendous job at keeping the hobby's reality compatible to techniques and technology of the 1940s to 50s, but guess what, people's interests moved on with the technology that around that time left ham radio in the dust.

¹ Technologically, FT8 is not even that exciting, and it's quite obvious that it's cleverer than the classical digital modes and by far far far cleverer than trying to do analog modes² over low-SNR links. It's early 1980's state-of-the art communications, with computer frontends, at best. The only cool thing is the channel code, an LDPC, but older channel codes could have achieved similar performance, albeit at the cost of higher computational complexity (not that it matters much, at these symbol rates)

² the discussion whether analog or digital modes offer better communication quality for speech has been pretty much scientifically answered in the mid-80s. Digital wins. There's no good reason people are still doing AM or FM communications for voice other than cost in the case of least-end handsets (albeit even the cheapest Baofeng handhelds for 20€ do DSP for audio, so even that doesn't count anymore) and backwards compatibility with the 1940s.

Before looking for reasons why HF activity "appears to be declining", we should look for evidence that HF activity is declining — so let's look at some available sources of data. While contests may not be fully representative of the broader HF community, they do involve a lot of people, and they provide a ready source of reliable data that goes further back in time than things like lotw/eqsl/pskreporter. So let's see.

What I see in this survey of HF contest results is a mix — the top performers are flat to maybe slightly down, but the number of competitors submitting logs has shown a sharp increase, resulting in many more operators/teams getting within striking distance of the winners (as reflected in the consistent increase in the 100th-place QSO totals for CQWW). What I don't see is any evidence that band performance is so bad as to severely hamper the chances of making a contact, or that the pool of HF operators (even code-qualified ones!) available to enter contests is shrinking.

Finally, to address the question in the title: We have been at an extreme solar minimum for several years now, the likes of which has very likely never been seen since the discovery of radio. This is (in my opinion) "what has happened to HF" recently. There have been extended periods of no sunspot activity on the sun at all, and this all contributes to making HF conditions miserable. 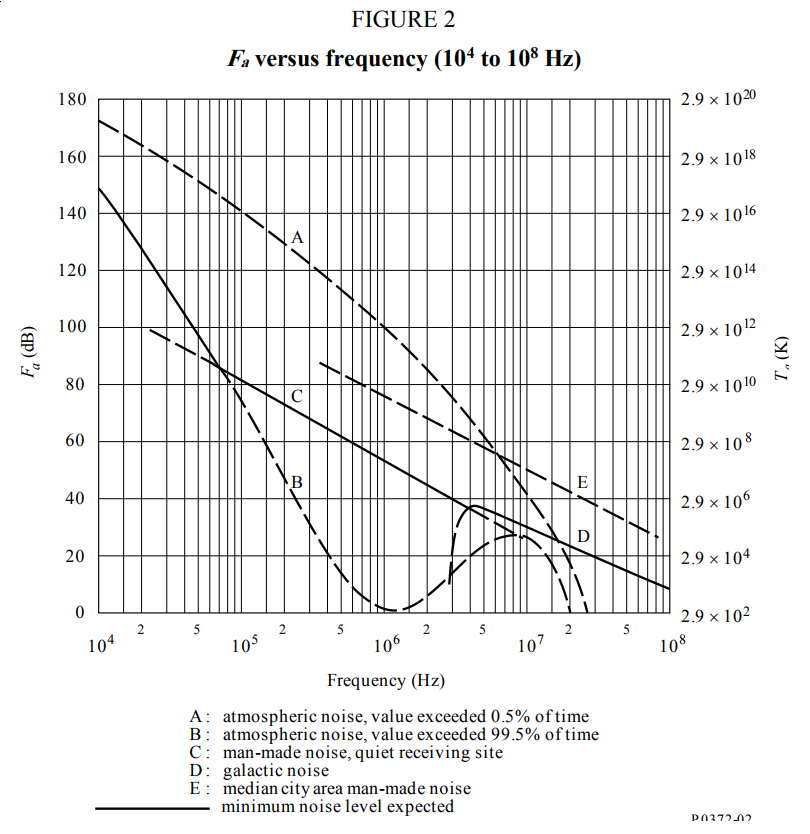 Note how the man-made noise at a quiet receiving site (C) is above the minimum atmospheric noise (B) from 70 kHz to 5 MHz. The full document has more figures that characterize noise specifically by time of day, season, and geography. But the gist is that at the quietest sites in this band (which includes the amateur 80 and 60 meter allocations), about half the time the noise floor is dominated by man-made noise.

It's hard to say if this is "a reason why HF band activity appears to be declining". The question has been asked before, though the poster of that question asserts the problem is not man-made noise. The trouble is in the word "appears". A lot of things contribute to appearances, quite likely many of them social as Marcus Müller explains.

Not the answer you're looking for? Browse other questions tagged hf rfi or ask your own question.

16
What is the cause of this unusually long period of terrible HF band conditions?

11
How to reduce RF in the shack when using vertical HF antenna (no radials)
2
Highest Q loading Coils
5
What is the purpose of limiting radio output power?
16
What is the cause of this unusually long period of terrible HF band conditions?
5
What is the proper way to electrically wire in a loading coil to a vertical antenna?
7
DIY SA612 + RTL-SDR HF receiver: good on laptop, but huge wideband noise on Raspberry Pi
5
Using shortwave communication, how difficult is it to transmit messages from the UK to the US?
2
What causes my direct conversion 80m receiver to receive AM broadcasts?
2
Buzzing FM interference
4
QRN: How to chase down a solid S9 noise floor on 40m only