They are not commonly seen in tuners or crystal sets.

Do vacuum variable have any Q advantage in lower voltage applications?

Q isn't related to the voltage. A simple definition of Q could be the ratio of the total energy in a system to the energy lost per cycle. So the biggest factor in Q is the loss in the dielectric.

Vacuum would qualify as a better dielectric than air, but another reason to prefer VVC would be stability and endurance. The VVCs are sealed in a glass or ceramic vessel and therefore less sensitive to temperature changes and immune to other environmental changes such as humidity, dust, insects, children, dog fur, etc.

When considering the Q of a tuned circuit, Q = frequency / bandwidth where the frequency is the resonant frequency of the tank and the bandwidth is the frequency difference between the 3 dB points. As shown (Wikipedia): 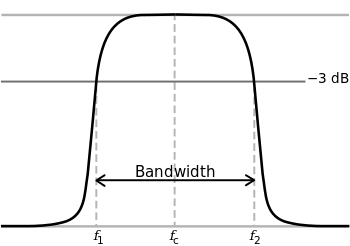 As to why VVC are not commonly seen in crystal radios, it could be because crystal radios are generally inexpensive radios. Vacuum variables are considerably more expensive than the usual air variables. Although there are some highly sought after air variables that could set you back >100USD used due to some of their features and the fact they haven't been produced in some time.

4
What dielectric strength is required for a variable capacitors in a 100W T-network antenna tuner?