How might one realize a first order, two dimensional RF field antenna for HF?

I just coined the term "field antenna". It is by analogy to the lightfield camera or the soundfield microphone. Essentially, it is an antenna that captures not only the strength of an RF field, but also the direction of it.

Of course, these antennas already exist in forms, such as phased arrays used for radar, or four-square antennas popular on the lower bands. However, I have a somewhat different use case in mind: I want it to work at HF, for receive only, and I don't want to implement the phasing with a fixed network (or maybe a few switched networks) as in the four-square antenna. Instead, I want to perform the phasing in software.

One possible application: listening to radio in stereo, with the sound heard corresponding to the direction from which the signal was received, a "wetware rotator" of sorts.

Now, the usual way to doing this processing is to decompose the signal into circular harmonics. These are like spherical harmonics, but in two dimensions (circles) instead of 3 (spheres). For the sake of simplicity I'm stopping at the first harmonic (first-order), so I will have, perhaps after some processing, three signals:

Described mathematically, I'm looking for the responses in azimuth defined by: 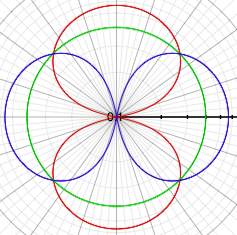 Now here's the question: how might one realize such an antenna? Remember the antennas need not actually have these responses: they might have other responses from which these responses can be calculated.

OK, this is an interesting one.

At first blush you could achieve this with two tuned magnetic loops at right angles to each other (visualize an egg-beater) and a 1/2 wave vertical for the omnidirectional part.

Of course, someone has thought of this crossed loop arrangement before, in 1907 Bellini and Tosi invented the Bellini-Tosi Goniometer: 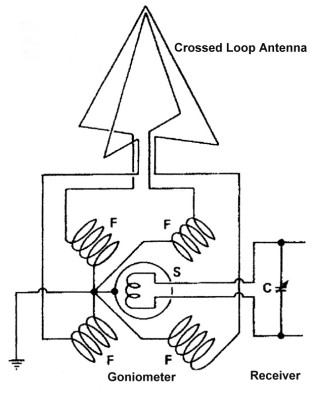 A coil is rotated inside an electrical field fed from the N-S and E-W antenna signal components such finding the angle of maximum signal. The antenna can be either be a circular array of 1/4 wave verticals or a Crossed-Loop Antenna: 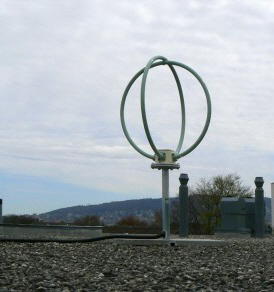 Systems based on this principal were the basis of the first radio navigation systems for aircraft until replaced by radar following WWII.

Back to the original question though, I think the loops would have to be tuned fairly precisely and high-Q loops are rather narrow in bandwidth so you'll have to pick your operating frequencies with care. But I don't see any obvious reason why it couldn't be done.

Three verticals (or three vertical dipoles) arranged in a triangle, spaced less than $\frac{1}{2}\lambda$ apart should do it.

Any pair of these antennas could be considered as an Adcock antenna. Each has the desired figure-of-eight response, and with the three antennas, we have three of these, each aimed sixty degrees apart. Unlike a traditional Adcock antenna, we won't be combining the antennas electronically, but rather connecting each element to an SDR (each phase-synchronized) and the combining is done in software. This allows each antenna to be arbitrarily combined with any others, in perhaps multiple ways simultaneously.

We could describe the azimuthal responses of each of the three possible pairs as:

These can be combined in some ratio to arrive at the desired patterns from the question. We can see that the ratios will be multiples of $\frac{\pi}{2}$ because:

So we can then reconstruct the first-order circular harmonics as: 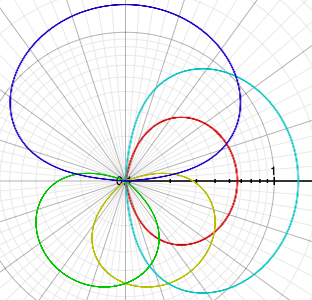 The 0th order response, the omnidirectional one, is easy: it's simply the average of the three antennas. This is equivalent to a vertical antenna in the middle of the triangle array. This serves to sense the phase of the signal so we can know if it is in the positive or negative lobe of the 1st harmonics. Without it, there would be a 180 degree direction ambiguity in any measurements.

Not the answer you're looking for? Browse other questions tagged antenna software-defined-radio phased-array .

2
VHF antenna / receiver suggestion for a UAV
2
Connecting two SDRs together for one to act as a signal generator
9
Marine VHF whip antennae - what are they?
9
Is there a name for the demodulation technique described here using the parallax propeller?
5
What might this tower be used for?
1
True near field distance for a short monopole antenna?
1
why is 3rd order intermodulation for 2110-2155 = 1710-1755?
3
Why is the total radiated power of array calculated by sum of square of excitation coefficients different from the result by integral of power pattern