Should Hams Using Skywaves Be Concerned About Their Groundwave Radiation?

Comments posted on various websites relating to amateur radio posit that the groundwave is unimportant for skywave paths. Is this concept correct?

Typically groundwave and skywave paths cover completely different distances and will not interfere, so coupling there is not likely.

Additionally, an antenna with good skywave propagation may have a higher gain at elevation angles appropriate for skywave than its gain at angles appropriate for groundwave propagation, or both angles could have similar gains, so the relationship between skywave and groundwave strength is unclear and may or may not be related. With the right antenna, the groundwave elevation angle might even be a null with no radiation at all.

Modeling of the specific antenna involved would be necessary to determine if there is any relationship between groundwave and skywave propagation for that antenna.

While the groundwave may not be present at a given receive location, this does not mean its existence and value are unimportant. They ARE important especially for vertical monopoles, as, for horizontal plane distances near the radiator they are an indication of the overall performance of the transmit antenna system — including its production of the radiation useful for skywave service.

Discussion of the graphic presentation:

Z = Elevation in meters above Earth, and E = Field Intensity in millivolts/meter existing at elevation Z at a horizontal distance of 1,000 meters from the base of the radiator (level Earth). The notation at the upper right corner of the graph shows that it lies on the 45° departure angle from the base of the monopole (1000 feet vertical height AGL @ 1000 feet horizontal distance from the monopole base).

Most of the radiation at/above/below that departure angle reaches the ionosphere, decaying at a 1/r rate — which rate applies to sky waves, not ground waves.

It is necessary to include the surface (ground) wave in a "Method of Moments" antenna system analysis such as possible using NEC4x in order for all of the fields launched by a vertical monopole in the elevation sector of interest to appear correctly, leading to an accurate understanding of these principles. 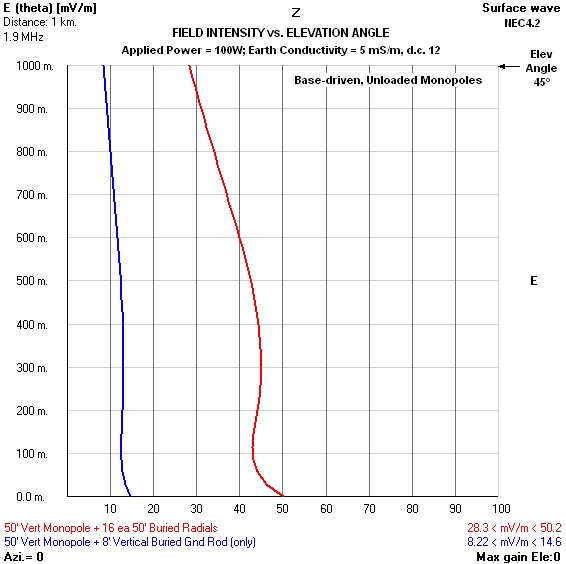 An interesting conclusion is possible with reference to the NEC4.2 study posted in this thread.

Not the answer you're looking for? Browse other questions tagged propagation vertical-antenna or ask your own question.

16
What bands and modes will give me voice at 3,000 miles?
10
How do I find out what bands are open?
7
What is the attraction of vertical antennas for HF?
1
How to learn about the physics behind propagation?
3
Why is VHF better than UHF in this situation?
4
High-resolution GIS datasets of groundwave conductivity of the United States, besides the FCC?
3
How to determine frequency and launch angle given a target skip distance?
2
Which is Better to Use with Vertical Monopoles: Buried Radials or Ground Screens?
2
How Accurately Does NEC-based Antenna Software Calculate Vertical Monopole Antenna System Radiation Efficiency for "Far-Field" (Only) Conditions?