I am planning on building a half-wave dipole that is fed by a coaxial cable. I found a way to do this on antenna-theory (http://www.antenna-theory.com/definitions/foldedbalun.php). The article talks about shorting the current that exists due to inductance in the antenna element, by using a folded balun.

I don't know if by using this method it also matches the real parts, if not, is there some way to do this, when I also use the folded balun? The coaxial cable is going to be 50 ohms.

A folded balun is effectively a shorted transmission line stub in parallel with the antenna. 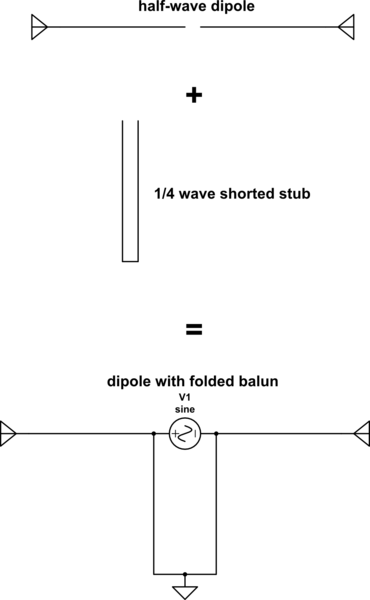 A quarter-wave transmission line transforms a load impedance to its dual. In this case the load is the short at the end, and the dual of a short is an open. So from the perspective of the feedpoint (represented by V1), the balun looks like an open circuit. An open circuit in parallel with the dipole looks like just the dipole. In other words, the balun has no effect on the feedpoint impedance. It serves only to provide a ground point where the coax shield can be connected, and it can do that because at the middle of the short everything is symmetrical.

Making the balun shorter or longer would have the effect of putting some reactance in parallel with the dipole. If the balun is shorter than a quarter wavelength, it will appear as an inductor. If it's longer, a capacitor. At any length it continues to function as a balun since the ground point is still symmetrical with respect to the rest of the antenna.

However, I can't say this is a very common thing to do. A half-wave dipole is already a good match to coax, so typically no additional matching is required.

Not the answer you're looking for? Browse other questions tagged dipole balun or ask your own question.

6
Impedance Matching Different Feedlines
5
Connect Printed Yagi-Uda Dipole Array with Balun to coaxial cable correctly
6
How does a folded balun work?
2
Balun and impedance matching suggestions for dipole antenna
9
Does a balun need to be made with coax?
2
Balun and tuner configuration for multiband dipole
7
How to determine number of turns for a 1:1 balun?
3
UHF cubical quad VNA analysis interpretation
4
Actual Impedance of a folded dipole at resonance
3
4:1 Balun question