How the performance of the half wave dipole antenna changes as the length changes?

I have been doing some research online and I found that some sources say if you have a full wave dipole antenna, there would be no transmission on the other hand some sources say that this is not true. I would like to know which one is true. Also I would like to know why the lengths of lambda/4 are used the most. Can a different length be used to achieve the same or better performance? I presume that it may be the smallest multiple length hence that's why it is used. Can someone please explain this in terms of electric and magnetic fields and how the antenna is resonating.
At what other lengths would the antenna resonate?

...if you have a full wave dipole antenna, there would be no transmission...

Here begins the misunderstanding of antenna directivity, antenna efficiency, and antenna impedance. Let's analyze each one independently and then bring it all together using the above example.

So directivity is a special case of gain:

We can plot the directivity of a dipole in free space:

From this plot we can make several observations:

where Isotropic Directivity = 1 by definition.

If we continue along the chart, we find the next highest directivity dipole is a 1.25 (10/8) wave dipole with a directivity of 3.18 or approximately 5 dBi.

Continuing further to the right along the chart, we can make the general observation that the maximum directivity after the 10/8 wave dipole occurs at 3 wavelengths and the next highest peak occurs every wavelength thereafter.

Here we can see that the free space dipole comes the closest to the specified 50+j0 impedance when the length is 1/2 wavelength.

The next highest directivity dipole, the 10/8 wave dipole, has a free space impedance of ~185-j890 ohms. Such a dipole would require a matching network (antenna tuner) to transform this impedance to 50 ohms.

The next highest directivity dipole, the 3 wavelengths dipole, has a free space impedance of ~1070+320j ohms. An antenna tuner would be required here as well.

Since the antenna conductor can reasonably be selected to minimize resistive RF losses due to skin effect, it is the efficiency of the matching network and the feedline that typically determines the gain of the antenna system for a given length of dipole. Consider that at 100% efficiency, the gain of a 2 inch dipole on 160 meters is only ~0.4 dB less than that of a 1/2 wavelength dipole. The problem is that we cannot obtain 100% efficiency in the matching network or the radiating element due to the extremely low complex impedance of the 2 inch dipole. As a result, the realized gain is much worse than directivity alone would indicate.

The One Wavelength Dipole

It is instructive to examine the case of the 1 wavelength dipole. It has an impedance of ~3430-j760 in free space. Its directivity is ~2.36 or ~3.7 dBi. This is ~1.5 dB better than a 1/2 wavelength dipole. If this antenna where operated on 20 meters, it would require an ~26 pF capacitor across the antenna and an ~4.7 uH inductor in series with the antenna to bring it to a 50 ohm impedance (see http://leleivre.com/rf_lcmatch.html). With a careful design, the loss of this L network could be kept to less than 1 dB. Add to this the loss of the double length of wire and the gain over a 1/2 wavelength dipole is marginal at best.

The pattern of the free space 1 wavelength dipole is roughly broadside: 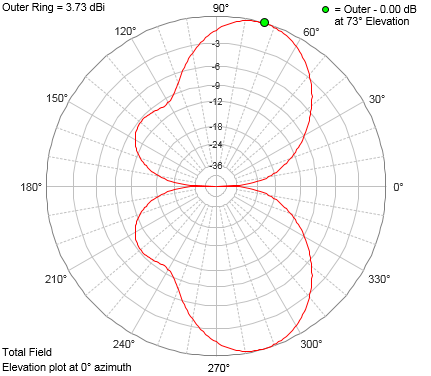 So we may roughly conclude that the effort, space, and componentry of a 1 wavelength dipole in free space results in marginal, if any, gain compared to its much simpler and smaller, 1/2 wavelength counterpart.

Not the answer you're looking for? Browse other questions tagged antenna dipole .

18
Why do folded dipoles have greater bandwidth than ordinary resonant dipoles?
2
Why long wire antenna length shouldn't be a multiple of λ/2?
5
Are there reasons why a receive-only wire antenna should not be λ/2 in length?
5
Why a capacitor is needed in Fuchs antenna?
2
What is the maximum and minimum of antenna gap of dipole antenna?
4
Using a trap out of its resonance frequency?
1
How to increase the bandwidth of half-wave dipole antenna?
5
Receiving the ISS SSTV: dipole antenna configuration and orientation
1
Can a smartphone with single antenna receive signals modulated by different schemes
9
Why are longer antennas not suitable to pick higher frequencies?