Is a J-pole an appropriate antenna for mounting to a steel handrail?

Last year, a group of us placed a battery-powered 2m digipeater using a J-pole antenna on a mountaintop. We're planning on doing the same this year except we plan to use a surge arrestor from the feed line ground to the metal railing. 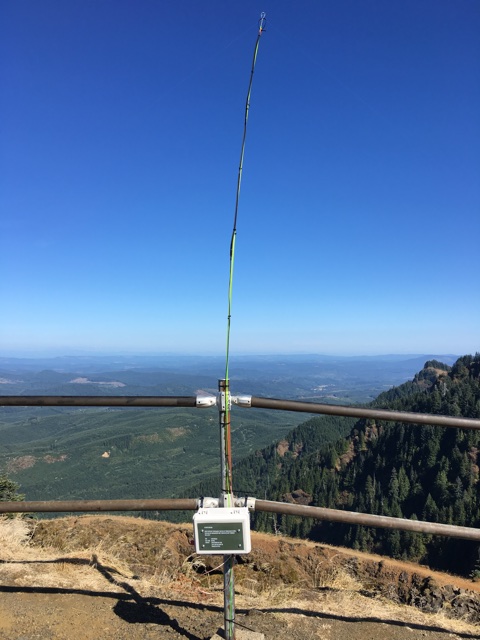 Is a J-pole an appropriate antenna for this situation? Would you recommend a different type of antenna considering we have a ground available to us in the form of the metal railing?

The antenna assembly in the picture is two fiberglass pull-rods screwed together with a short feed line and a 2m roll-up J-pole antenna. The performance of the setup pictured was fine--other digipeaters, up to 193 miles away, heard this station.

Here's a panorama taken by someone else of the summit. The railing is over 50ft long in roughly a U shape. The top is rocky dirt. The posts are set in cement forms and are immovable.

I have several years of experience operating in the high Alps in Switzerland as well as the lower range mountains in der Pfalzer Wald and der Schwartzwald (the Black Forest) in Germany on UHF, VHF, and HF. For omni UHF and VHF, I would highly recommend a simple quarter wave groundplane that is easily broken down into a backpack. I could find no signal advantage to various forms of J pole antennas. I believe common mode current issues offset any potential marginal gain.

My best quarter wave, omni antenna included four ground plane (counterpoise) rods that screwed into an SO-239 like base that was threaded to receive the four elements. A downward pitch of 30 to 45 degrees achieved a nearly perfect 50 ohm resonant (non reactive) match. The pitch of the elements also made the antenna self supporting on stumps and even large rocks worked well. The antenna assembled and disassembled in less than a minute and easily fit in my backpack. If the hike was shorter, I would include a 3.5 meter collapsible painter's pole that I could post into the ground or lash to railings or benches at outlooks, towers, castles, etc. I even set one up inside the glass visitor center at the Jungfraujoch. I have lashed it to railings several times at the famous location for the filming of the James Bond episode On Her Majesty's Secret Service on Piz Gloria at the spot where the female sleeper agents were curling and where the helicopters hovered to defeat Ernst Stavro Blofeld aka Comte Balthazar de Bleuchamp (Telly Savalas). For some reason, despite my best efforts, I could get no better than '007' signal reports from there...

If you are up to carrying a small, easily broken down yagi, this is the best solution as often you can predict the favorable direction for signals making the 6 to 9 dBi gain worth the extra effort.

If you are into satellite contacts, high mountain ranges can greatly extend the AOS (acquisition of signal) to LOS (loss of signal) time if you are on the peak or the right face. This also often allows better contacts with a well constructed quarter wave due to the lower percent of ground clutter in the overall path or, alternatively, the reduced path loss. Know your grid location as these are often sought after areas for chasers. It seems that you can gain a couple of S units of quieting simply based on your grid square regardless of your antenna prowess.

And don't overlook self spotting when mountain topping. Most hams are happy for the heads up in order to log a rare one.

Not the answer you're looking for? Browse other questions tagged antenna antenna-theory antenna-construction vhf grounding or ask your own question.

8
Is steel or aluminum structurally a better material for catenaries?
3
Adequate lightning protection for sloped dipole or G5RV?
5
Mounting my antenna
3
Stabilization of an antenna pole with anchoring cables
5
Will stainless steel bolts work with my copper antenna?
3
Mounting a J-Pole and Yagi on the same mast
3
Is a copper J-Pole antenna better than a Slim Jim for transmitting?
1
Mounting antenna on a metal structure? Tower/Antenna insulator?
1
Are stainless steel studs acceptable as a feedpoint connector for an aluminum loop antenna?