Can a Digital Down Converter, at the same time, generate I,Q streams & Downconvert?

A Digital Down Converter (DDC) is usually used to convert Real Digital Signals at a high frequency to baseband (centered around 0Hz). DDC does this so by producing negative and positive frequencies.

However, at the same time, perhaps using an approach as follows, is it possible to downconvert a real digital signal present at the DDC as well as generate the corresponding I,Q from it? How can we prove that it can be done? (mathematically or by other means) 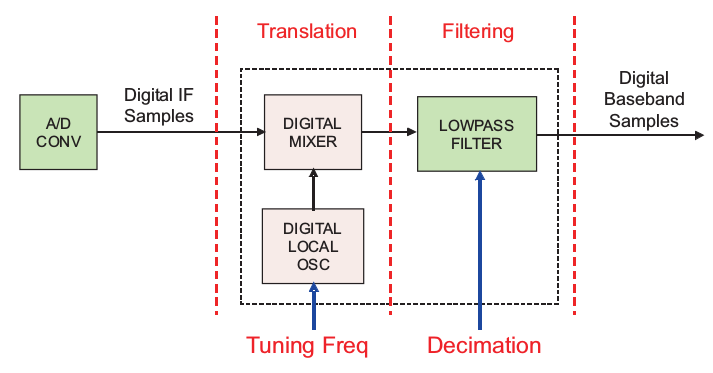 One way to convert a real-valued signal into a complex-valued one is to set the complex part to zero. This has the effect of "mirroring" the spectrum: all the negative frequencies are the mirror of the positive frequencies. This can be seen by the Fourier transform property for any real $f(x)$:

A DDC is usually implemented by multiplying the input by a complex sinusoid to shift the desired signal to 0 Hz, which works due to this Fourier transform pair:

After shifting the desired signal to 0 Hz, a filter removes out-of-channel interference. Since the negative frequencies that appeared as a consequence of setting the complex part of the real input to zero are removed by a filter, a DDC implemented in this way need not do anything in particular to generate the complex-valued output.

The alternative is for the DDC to operate entirely with real numbers. So rather than calculating $f(x)e^{iax}$ as in equation 2, it calculates $f(x) \cos(ax)$. As with a simple analog mixer the result is output frequencies at the sum and difference frequencies of the input and the LO. One of these image frequencies must then be removed by filtering.

Maintaining precise and stable phase and amplitude relationships between the real and imaginary parts in an analog circuit is difficult. However in digital implementation this is a non-issue, so it's common to see digital processing done almost entirely in the complex domain. As such, in some sense it's more work to implement a DDC which does not output complex samples.

Before any decimation, a signal needs to be sufficiently bandpass or lowpass filtered such that any image frequency spectrum, that could alias with the desired spectrum after decimation, is first removed.

So with a narrow enough band-pass filter inserted ahead in the signal path, a sub-sampling decimator-complex-downconverter could be done in one step.

However, a narrow enough band-pass filter likely is far more costly/difficult to implement than a low-pass filter and decimator placed after the quadrature down-converter.

Not the answer you're looking for? Browse other questions tagged software-defined-radio direct-conversion superheterodyne .

2
Can HDSDR perform the work of Direwolf?
2
Can I send samples from the device made by myself to GNU radio?
9
Is there a name for the demodulation technique described here using the parallax propeller?
2
USRP: Are RX and TX on the same or different channel for single daughterboard?
3
How high an SWR can the USRP 2901 (B210) handle?
6
How can quadrature mixing adjust the phase of all frequencies by the same amount? Can it be done in the digital domain?
2
Could not observe the Meteor M2 even though I scanned the sky at the time it passes with a high elevation degree (77). What might have happened?
10
Would it be possible for a software-defined FM receiver to demodulate two signals on the same frequency?