What is the maximum number of turns in a ferrite core used as a common mode choke?

Is there a way to estimate the maximum number of turns which can be used with a ferrite core used as a common mode choke?

There is an excellent paper on the subject by Jim Brown (K9YC) ( http://audiosystemsgroup.com/RFI-Ham.pdf ). Unfortunately, his maximum frequency of interest is about 100 MHz and my application is VHF and UHF. [edit: this sentence is wrong]

The ferrite core manufacturers provide excellent information for impedance of a single turn at different frequencies. This can be used to estimate the impedance when using multiple turns, so long as the limit is not reached; that limit could be as low as 1 turn!

I am willing to buy bunches of cores and measure them, but it would seem to be more efficient if I could somehow estimate an ideal geometry and use that as a starting point. For example, if the limit is due to core volume, maybe lighter cores would be the preferred starting point. Or if it is somehow related to diameter or circumference, then perhaps a smaller, wider core would be better.

The K9YC paper you mention gives data up to 1 GHz on page 49: 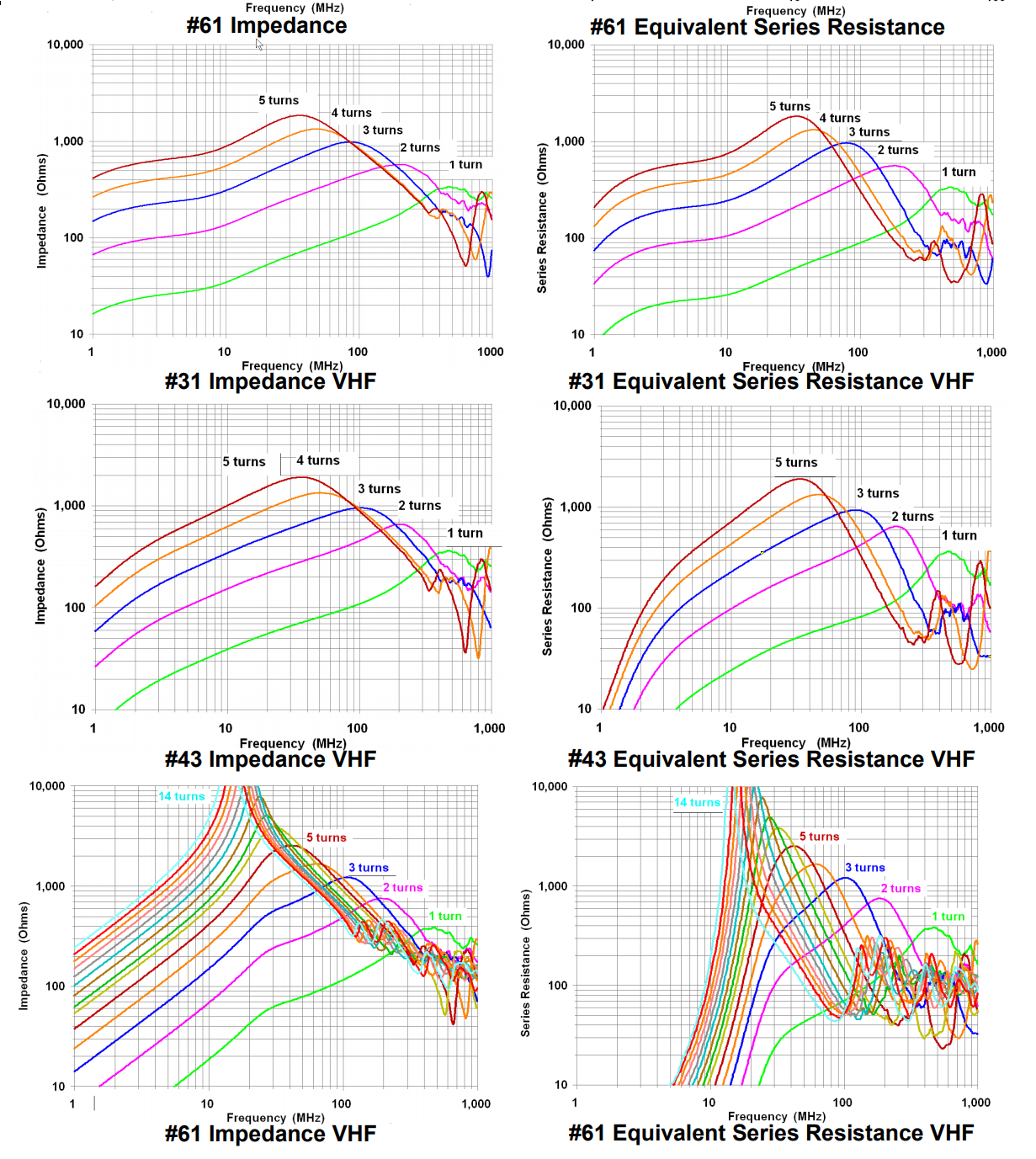 These data show for these core types the maximum number of turns is just one or two. Furthermore, it's quite difficult to achieve a choking impedance above 1 kΩ. That's not very much, and for many applications you'd want more.

To get a higher choking impedance will require a larger core, and so ferrite chokes can become quite expensive at higher frequencies. For this reason it's often worth considering other techniques to supplement or replace them.

The primary issues with coax wound common mode chokes are;

At VHF and UHF frequencies these pitfalls can be even more exasperating as windings become a significant fraction of a wavelength and the selection of suitable core materials diminishes.

You may wish to examine other methods of common mode suppression such as 1/4 wavelength sleeve baluns or transmission line baluns before attempting the coax on a ferrite choke approach. But if you care to pursue some lab work with ferrites you may find the VNA measurement method used by Steve G3TXQ to be helpful. His published work is for HF baluns but the measurement technique should be extensible to the higher bands.

What you are mostly likely to find, however, is that there is no number (minimum or maximum) of coaxial turns on a ferrite core that will make an adequate CM choke at frequencies above 100 MHz.

16
Where are the baluns for VHF and higher? How can one be made?

5
Is this the Correct Ferrite Core to Reduce RFI as a Common Mode Choke?
9
Importance of Ferrite Size in Coax Choke Balun
9
How to effectively test and interpret the "working range" of a ferrite core with a signal analyzer?
3
How do you calculate the number of turns for a common mode choke?
1
Common-mode choke (CMC) hurting my SWR. Live with it? Drop the choke?
1
Can ferrite rod antenna be made out of the choke?
3
Using PVC coated solid-core wire for a small number of turns on toroid