How can I calculate the 1/4-wave monopole impedance dependence on groundplane angle?

I watched this video of a very nice explanation of a simple dipole and 1/4-wave monopole. In that video they show how you can impedance match the 1/4-wave monopole by bending the 4 (virtual ground plane) pins downwards at an angle, $\theta$, from the horizontal plane. Doing this we can get any impedance ($Z$) between 25 and 70 $\Omega$. This is also very well explained here. However, on the previous page of that last explanation, the impedance also varies somewhat (between 20 to 40 $\Omega$), with the height, $h$, above true ground of the antenna. 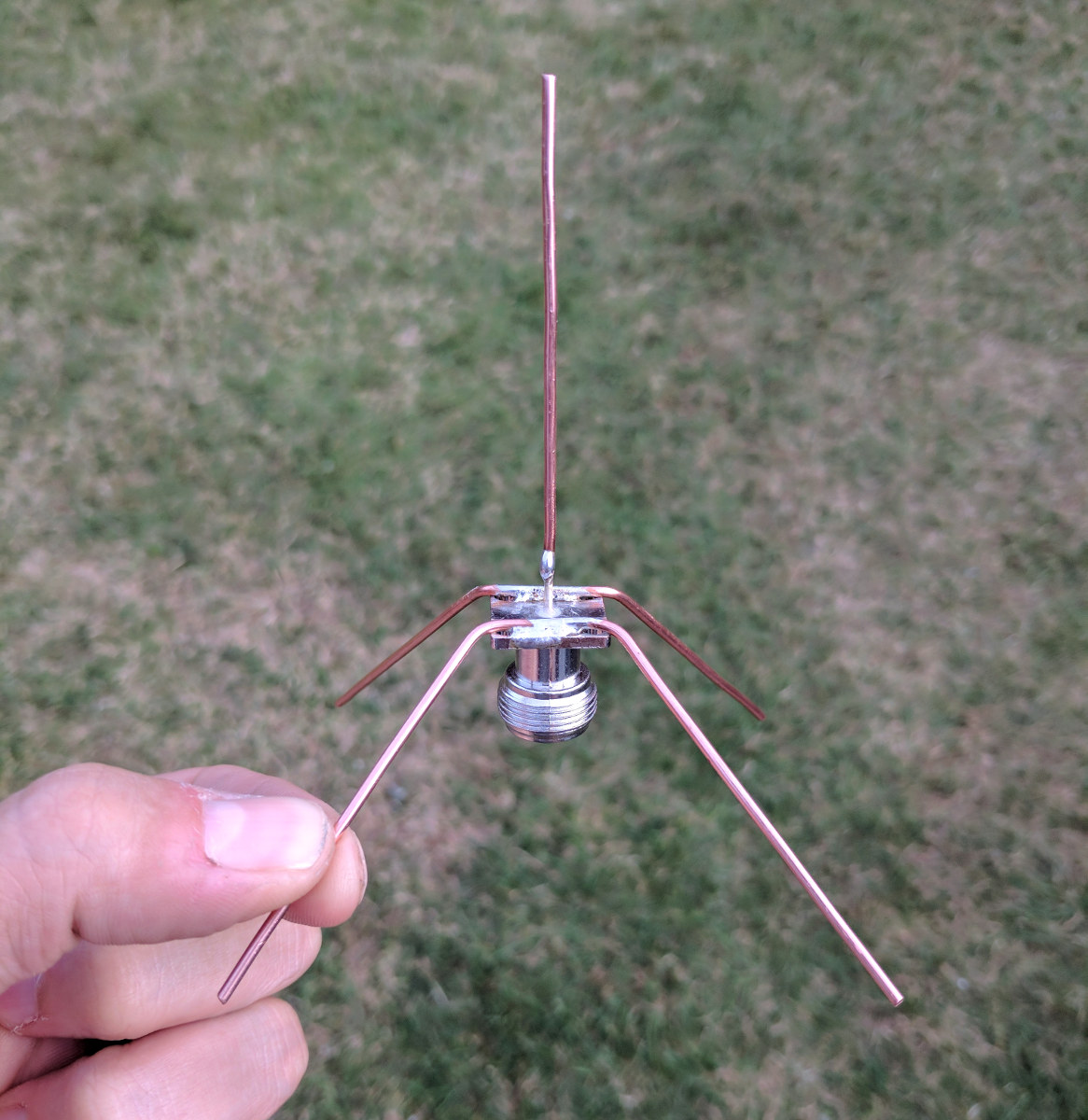 EDIT: I found this paper, but the derivation doesn't properly include the angle dependence. Also, I don't trust the derivation, as they say the currents are cancelling in the radials, but if they are not at right angles to the radiator, I guess they can't cancel in that direction perpendicular to the horizontal plane?

Once a ground plane antenna is 0.5 wavelengths or so above ground, there is no significant effect from the ground on the impedance of the antenna so it can be ignored.

A close approximation of the real part of the feedpoint impedance in ohms of a 1/4 wave ground plane antenna in free space is given by:

The imaginary impedance in ohms can also be closely approximated by:

Here is a simulation of the complex impedance of such an antenna:

You can see that at ~45 degrees of droop, the real part of the impedance is ~52 ohms. It can also be observed that at other angles there can be an appreciable imaginary impedance for which compensation could be added to negate its effect on SWR.

Recall, however, that impedance or SWR is not a figure of merit for an antenna. The highest gain of this type of antenna in free space occurs when the radials droop 90°. In this configuration, the antenna can be viewed as a vertical, 1/2 wave dipole or a 1/4 wave sleeve antenna if the feedline enters from within the bounds of the extremities of the radial field.

In comments now moved by the moderator, the OP bemoaned the notion that amateur radio operators have lost their technical edge as no one was able to give fundamental equations to support the observable effect of impedance change due to ground plane droop.

I participate on this board to help mentor hams as well as to learn from the many other willing regulars and even the visitors on this site. Since this is obviously a volunteer effort, I differentiate the level of effort I put into my responses from the type of response I would give in a professional setting. However in the spirit of helping the OP to gain a broader understanding, I offer the following.

The graph that I presented above is done with a technique called moment method. In the distant past as a student, I was required to demonstrate that I could calculate this long hand. But just as I no longer calculate a square root by hand, I used a computer tool to quickly get to the answer.

Another technique that can be used to derive the complex radiation resistance is to integrate the Poynting vector over a large sphere and then equate this power to:

where $R_o$ is the radiation resistance at the current maximum point and $I_o$ is the peak time value of current at that point.

Yet another approach is to use the induced EMF method1 but this can only determine the self impedance and it will be limited to length to diameter ratio > ~100. It is, however, a closed form calculation. To fully calculate the self impedance with this method requires a 40 step or so derivation which I will not execute here. But the interesting result is that for a 1/2 wave dipole (recall that this is the realized configuration of a 90 degree drop of the radials) the real part of the self impedance is:

The same method applied to a quarter wave radiator over a large ground plane results in:

Take note that this lengthy computation results only in a simple change of the constant. This method closely agrees with the moment method presented above. It should also be recognized that this is another demonstration of the well known feedpoint impedance comparison of a 1/4 wave antenna over a large ground plane and 1/2 wavelength, center fed antenna.

The imaginary part of the self impedance can be similarly calculated with the induced EMF method if this information is required.

Here is the antenna modeling information for 1,2,4,6 and 8 ground plane radials at various angles of slope.

And here for impedance of a vertical dipole relative to angle on bend of the lower half.

And here for relative impedance as the wavelength fraction elevation of the feedpoint above ground.

With this insight into the fundamental behavior of RF on wire you will better understand what is behind the observed behavior of the antenna once it is in the operating position when the influences of things nearby are constant.

If you would want to make an antenna model where you set your wire size, radial angle, feedpoint elevation, etc., the appropriate 4NEC2 models are provided with each of the above studies. These will give a better approximation.

12
What is the impedance of an end-fed half-wave antenna?
4
How can the impedance of a half wave dipole at its resonant frequency be purely resistive when the voltage and current are seemingly not in phase?
7
How can the voltage at the center of a resonant half wave dipole be zero if the input impedance is 75 ohms?
8
Can I use a helical ground plane radial in the same way that a loading coil works?
1
How to calculate impedance in antenna design's practice?
2
Destructive interference between two close antennas
3
Impedance of V Antenna as Function of Angle
2
What do radials really do for a vertical antenna?
1
How do you calculate the impedance of a parallel-wire balanced feedline (ladder line)?
2
Measuring actual feedpoint impedance for a given frequency